In this post, I'm sharing with you the best tips on starting a toy rotation system so you can organize all of the toys without having a huge mess everywhere.

Time is flying by guys! I cannot believe my littlest one is 14 months. I feel like with each child, at least with my own, they learn from the older ones and start moving at an earlier age.

Have you ever been to a store that just had too many options? So instead of getting something, you just left? That's how kids feel about toys. By starting a rotation system, kids get a fresh new set of toys to play with because it feels like something new and different.

Here's my tip to new parents out there: Start a toy rotation system now!

As baby gets older, gifts from you, your spouse, grandparents, friends and school will start stacking up. Trust me on this. Even if your child has toys flowing out of their playroom, they'll exclaim there is nothing to play with!

By implementing this system, there will be less clutter and more fun. What's not to love about a system that does that? We've implemented our toy rotation system in the last year, and I've been quite impressed by how awesome it has worked in getting the kids to go back to the playroom. Dare I say that I don't need to buy another toy again (unless I have to resort to bribery)?! 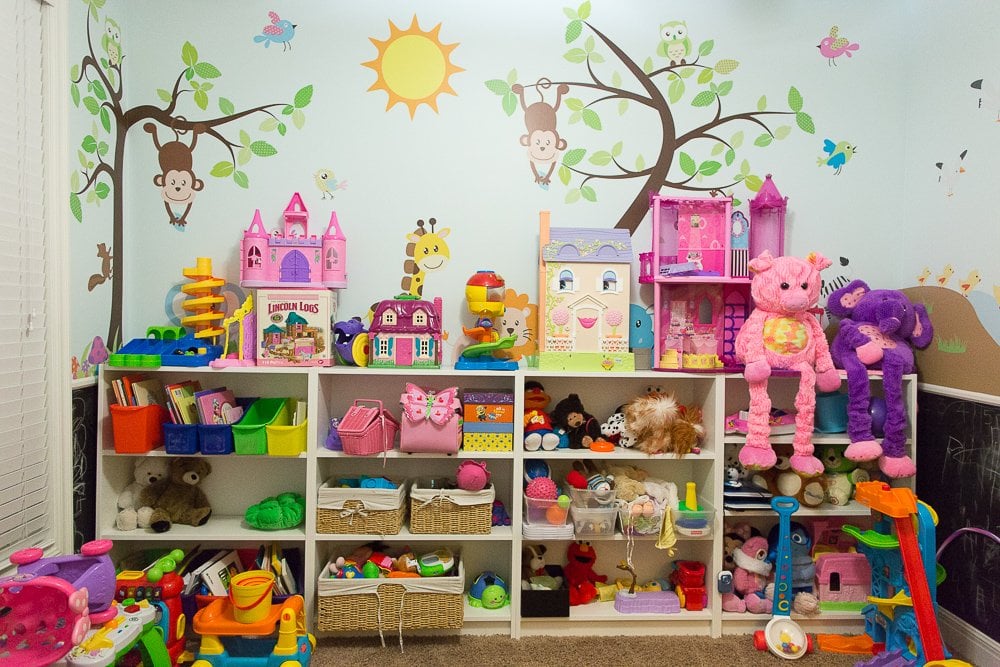 1. Gather every single toy and empty boxes for decluttering.

The key to this is finding every single toy. You are going to be organizing starting from this big pile.

It will be kind of scary seeing ALL of the toys in one area. It might seem like insanity honestly. That's at least what it felt like for me. Throw away toys with missing, broken or incomplete pieces. It will be a relief!

First, separate the toys out by seasons. Yep. You read that right. Some toys actually are specific to season. If you have cold winters, chances are those outdoor toys won't be used at all.

The goal here is to put all the puzzles together, racing cars and dolls together for the next step. If you have multiple kids with varying ages, make sure you have a pile for that as well.

6. Store the rest in bins where the kids won't access them.

We store them downstairs in the basement for easy access for adults, but the kids don't ever feel like they are missing their toys!

7. Figure out your rotation system.

You can either wait for the kids to get bored with their current toys or be like me, and just rotate them out for each season. One step further, you could take a photo of each toy and create a "toy catalog" for the kids to pick out from for a new rotation!

If you liked this post, you might check out some of my other posts on organization tips and tricks around the house.