This Despicable Me Minion Craft & Birthday Party Favor can also be used as a fun popcorn craft project during any party to make it a fun activity! They are easy to make and I'm sure your children will have a blast putting popcorn and other snacks in the popcorn holder!

Aren't these birthday party favors the cutest? They can be different and each kid can make their own minion face. You can set up the party with part of the craft already completed and the kids are just having to glue on the bodies and faces!

My girls had so much fun making these snack & popcorn boxes! You could also use them as favors for party gifts if you have a Minions themed party.

Look how cute these are:

Supplies for Despicable Me Minion Craft

Next, cut a 2-inch by 3-inch piece of blue card stock for the overalls.

Then, cut the yellow card stock into four 6-inch squares. Keep two squares for a single box and set the other two aside for another separate box.

You should now have a few sets that look like this (depending if you are using one eye or two eyes for the minions).

For the rest of this tutorial, we will call one of the yellow card stock square sheet A and the other one sheet B.

On BOTH yellow sheets, on all three sides you will want to create a fold that is 1.5 inches from the side. You can use a score board for this or do it manually if you don't have one.

Again, on BOTH, after folding two parallel sides over, you'll want to create a corner round punch.

This will make the head of the minion rounded.

On the image below, the top row we will refer to as sheet A. The bottom row will be referred to as sheet B.

On sheet A, just cut one slit on the sides to make the flap of the snack box.

On sheet B, cut out the squares on the sides. Notice where I placed the double sided tape (you could also use glue) in the image. 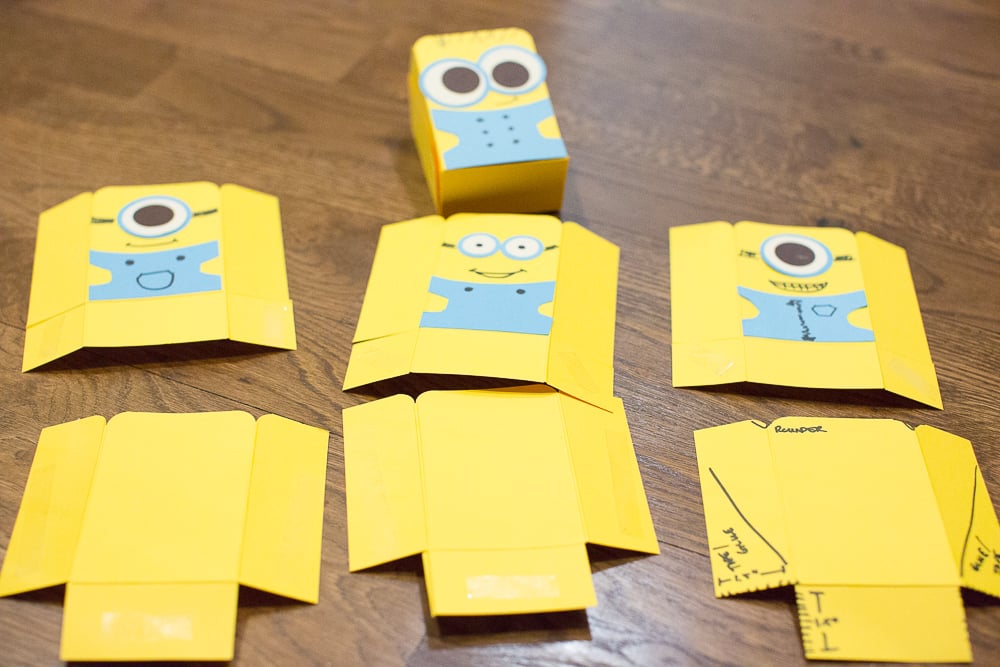 Step 7 // Glue the Minion Craft Together

Glue or use double sided sticky tape on the tab of sheet A to the top of sheet B's bottom section.

Next, flip it over. On Sheet B, glue or stick a double sided tape in a diagonal line from the corner of the tab to the top. This is where you will glue to opposite flap. Do the same on the other side.

Stick the sides together. Take the flap INSIDE and tape it to the sides that you just put together.

1. For each overall, you will need the blue 3-inch by 2-inch card stock.
2. Cut out the shape similar above for the overalls.
3. Use the black marker to create buttons.
4. Attach the eyeballs: blue, white, and then use a marker to draw the eyeballs (or the brown card stock).
5. Next, draw the goggle straps and the smile.

Lastly, stuff some popcorn and cheese balls (or whatever snack you are into) into the minion snack holder!

Here's another fun paper craft project that has been popular on this blog as well - DIY large paper flower tutorials for hanging on walls!

« 3 Day Weekend Vacation in Kansas City - Things to Do in Kansas City with Kids
The Ultimate Guide to Big Cedar Lodge and Wilderness Club Review in Branson, Missouri »