Back when I was pregnant with my first child, I thought I would be a very strict mom. I would never give my kids candy, soda, cake, cupcakes, snickers bars, suckers, or even worse, Twinkies. I mean, seriously, what kind of parent are you if you did that?

Now I know. A parent that’s just trying to survive. To that aforementioned parent: I get you now.

We’re all [parents] just trying to survive. Survival mode kicks in big time when your kiddo turns two. That’s when your jelly-fingered, chocolate-covered two year old can talk, back talk, whine, cry…REALLY LOUDLY…in public places…to specifically embarrass you. So one survival tactic I’ve learned is the art of negotiating with a toddler.

It seriously is an art. First off, I have no idea where my two year old learns her negotiation skills. I feel like every day, we have the same negotiations on things I need her to do. In every case, it seems like she always has the upper hand. Here are the daily negotiations that occur in my household:

1. Getting ready to leave the house negotiations:
Every week day morning, I’m on my own to get the girls ready. Ryan is typically out of the house by the time I wake up the girls. I have exactly half an hour by the time I wake them up and am out the door with them. When Ansley was a newborn, I had this down to a 15 minute ritual. Then Aubrey came along, and it was 20 minutes. I THOUGHT as they got older, it would be easier and faster. Nope, not the case. The oldest toddler will not like her outfit or she will demand to put it on herself. The first time she argued about putting it on herself, it was ADORABLE. Fifth and sixth time, I was sighing, watching the minutes go by on the clock, and then repeating the song “Let them be little” in my head over and over because I know these moments will be gone before long.

2. Nap time negotiations:
Ansley never wants to take a nap. But I know the ramifications if a two year old doesn’t take their afternoon nap - they will freak out at dinner time and bath time. So if a parent wants to keep their sanity during the afternoon, they must give their child a nap. Unless if their child is like my second child, Aubrey. She’ll nap almost anywhere. She is shown below napping mid-lunch time at school: 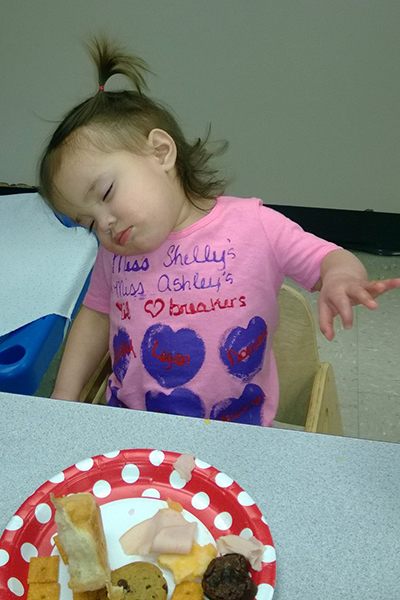 Anyway, my nap time negotiations typically involve chocolate after they wake up from a nap.

3. Picking up toys negotiations:
This typically involves me threatening my kids to give their toys to their cousin Reese. Usually, they’ll comply with picking up an 1/8th of their toys.

4. Grocery store negotiations:
My oldest is to the point where her blabbering could get a parent embarrassed fairly quickly. Example, “Aubbie pooping mommy!!” that can be heard across the store. We typically negotiate with free cookies from the HyVee bakery department and cheese samples from the deli.

5. Going Night Night negotiations:
It used to be that reading one book was all it took for me to peace out of her room. Now, its more like four books: a book that I read, a book that she semi-reads to me, a book that she picks out after we read the second book, and a final book to stop her whining.

I just hope my bad negotiating skills don’t turn my kids into diabetics. With the hubs on a health kick and his strict orders of no candy in the house, I’m hoping that Ryan’s put some preventions for that in place.

What types of negotiations do you have with your kids?