Learn the best way to organize your basement when living in a shop barn.

Earlier this month, Ryan FINALLY finished one of the things on my honey do list: building me a basement shelf so that I could organize all of my mismatching plastic totes. This was a HUGE deal to me. My stuff had been in these plastic totes since my days in Oklahoma – that was 2005. Crazy, I know.

Most of our things were stored in $5 grey totes from Wal-Mart. We accumulated well over 30 totes at one point. They worked well for storing. They were “sort of” stackable (as long as there wasn’t too much heavy stuff inside). Here’s what it looked like when we lived in the shop (the only picture I could find):

To organize and know what was inside of them, we’ve tried numbering and keeping a physical list. That didn’t work. We tried masking tape with hand written labels. Ryan hated it because he didn’t like my handwriting. Then we tried a label printer. Ryan didn’t like that either because the label kept peeling off. At one point he asked me to keep an excel sheet with the contents. I rolled my eyes.

When we moved to the apartments a few years later, these totes went into storage for about 2 years.

After retiring our nomad lifestyle by purchasing a house, it made things pretty simple because 75% of our stuff was already in these movable totes. Well, this past month we decided to go through them and get rid of stuff we really won’t need. Let me just say this: I’m really glad our little city is had a garage sale in May. I got rid of a lot of junk – and got money for it!

You really don’t realize how much of a pack rat you really are until you go through some of this stuff. I found an ET cup, old super Nintendo games, my wedding dress (I know!), bowling balls . . . it makes me realize that I should have gone through it before I moved to save me the hassle of moving a bunch of stuff I would never use.

Up to this point of moving in, most of the projects I had Ryan do was interior painting. He started to hate painting (I would say only because who the heck PRIMES a freaking bathroom three times – oh, Ryan. That’s who.) So we decided to do some spring cleaning to take a break from painting. Ryan got this urge to build and be manly after our Powder Room painting fiasco/incident/argument/project (will be blogged at a later date).

His first ever building project for me was a white shelf for our shop – let me just say it was a good effort on his part 🙂 I wish I had a picture of it so I could show him how far he’s come. Now that I think of it, I’m pretty sure he is probably glad I don’t have a picture of it. He would tell you at the time, he didn’t have a miter saw, so he had to make due with the “tools” he didn’t have.

The second big project was our greenhouse. This time, he did have his miter saw (oh, how he loves it). It was pretty awesome, except for the fact that he put the WINDOWS the wrong way! they should have been sliding left to right windows. Instead, he installed them as up and down windows. So we had to physically take out the bottom window when it got really hot in the greenhouse. Other than that, I must admit that I was pretty impressed. I like a man who can build me stuff on the fly 😉 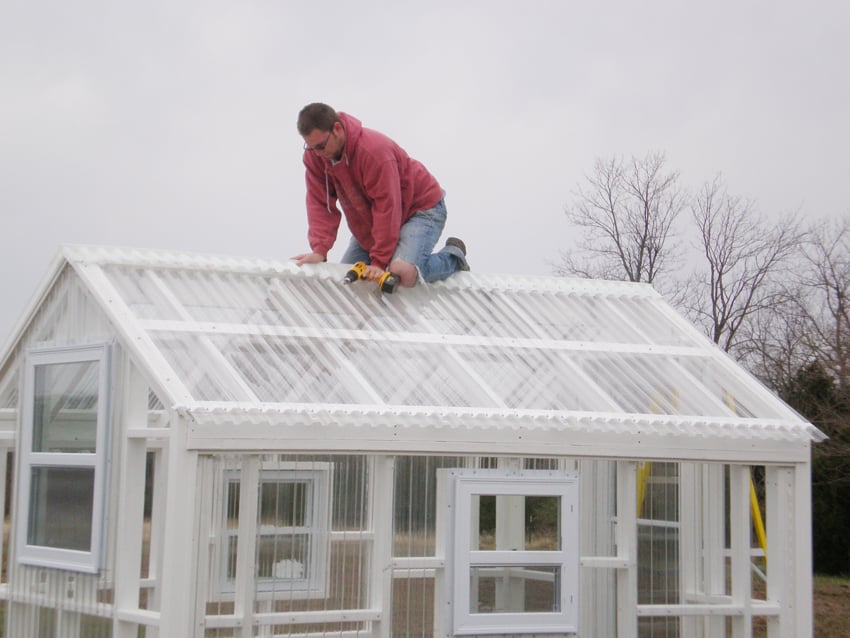 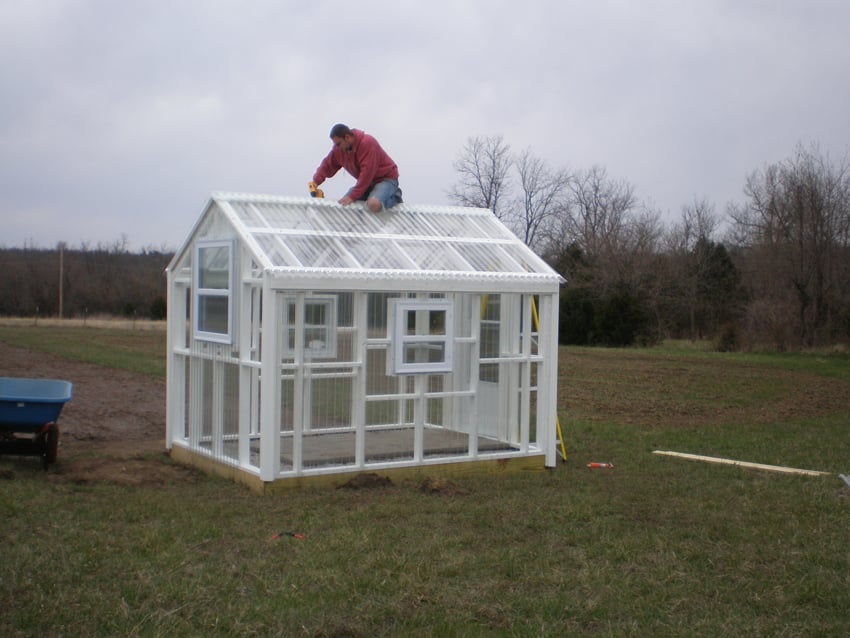 The project after that was his miter saw table; which he left with the shop when we sold it: 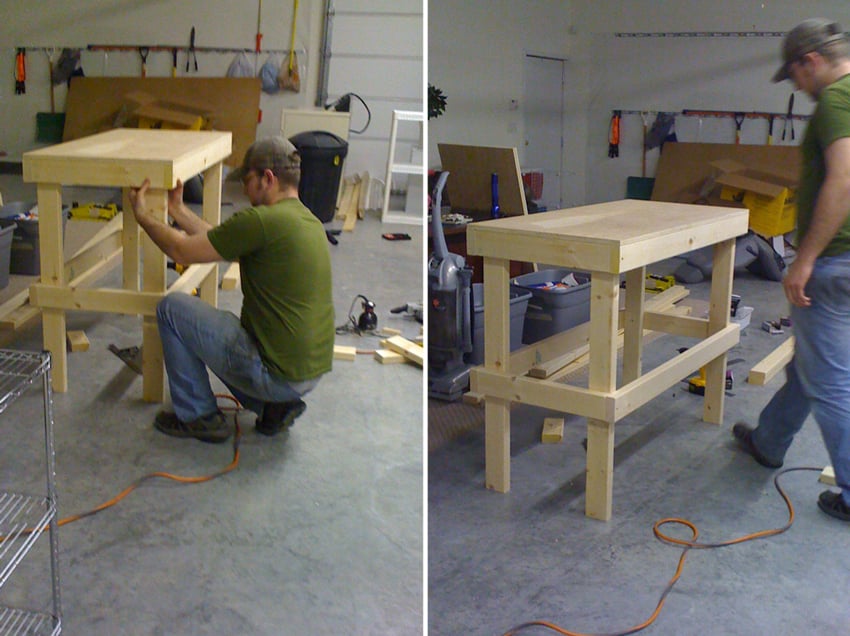 This month, he got his second shot at building another shelf. I asked Ryan to build me a shelf that would not only be functional, but also allowed us to use clear totes that were stackable and uniform. Even though he never really asked for my input, it turned out pretty good. The only thing I wished for was that some of them allowed for storing odd sized stuff like wrapping paper. I’ll just add another shelf to my honey do list.

Here’s what our basement looked like with all of our totes thrown everywhere after our move (remember, we got two kids during the move…don’t judge).

Here’s a picture of the shelf without the storage: 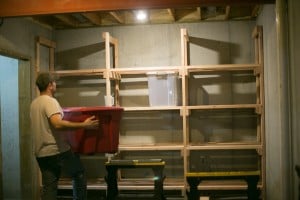 The shelf was made with $200 worth of 2 x 4s. Yes, this shelf was expensive even with cheapest grade wood. Additionally, we did not use sheets of plywood for the shelf. Rather, we used the 2 x 4s with spacing (kind of pallet-style). We learned that in basement/shop areas – dust collects quickly. With this design, hopefully it minimizes any dust bunnies.

Now that we are older and wiser, we knew a few things from experience about building and storing stuff. We decided to upgrade to a little more expensive totes that were clear, had more depth than the cheap grey totes, and flexibility of stacking smaller sized ones on top of them. Let me just say that it was the right move! No more labeling, we can see what everything is, and I could store more in each bin! I could also buy a small and medium size bin, and they fit in one section stackable! I’ve been able to store TWICE as much stuff as I did in the old totes.

Although Ryan says that he had already thought of this, I shared with him a tip prior to building the shelf from a sage coworker who told me to relay to Ryan the following: When you build the shelf for the basement, build it a few inches off the ground to account for flooding. Oh, how I am glad we listened to him. Why? Let me tell you another story.

Since moving into the house in October, we had slowly been organizing and sorting through the totes. With two babies under two, this was tough work. We had the contents of the totes scattered EVERYWHERE in the basement. Contents were literally sitting on the basement floor for weeks on end (like my scrapbooks). Somehow, Ansley got into our college notebooks and loose leaf notebook paper, and threw them on the ground. So I had piles of paper everywhere. I had old cell phones in piles on the ground. When the girls got fussy, I just left stuff on the ground and left it for the next time I had time to spare to organize.

Last Friday, I took the day off in hopes that I could hang out with my birthday girl, Ansley, who just turned 2 the day before. I decided to drop her off early in the morning so I could finish a few chores, then pick her up early to hang out and make her day special.

At 6:00 AM that morning, Ryan went downstairs to the basement to feed our cats (you do not need to worry, their food and litter boxes are down in the basement, but they live upstairs) and everything was fine.

At 9:00 AM, the house was empty of babies and I could finally get some organization in. I go downstairs and find 4 inches of water. My heart sank. Long story short, sump pump was working, we had coverage through an endorsement from our insurance company (thank God), and found that the city sewer that had storm water came up from the drains that were in the basement.

Notice in the following picture not just the water, but the shelving. I had JUST organized everything the week prior to this rain.

When we purchased the house, I talked to him about all sorts of insurance coverage we could get through our agent. If it weren’t for me, I’m pretty sure we wouldn’t have insurance. I told him we should get earthquake, flood, sewer….he said that was ridiculous. Not ridiculous now is it? Looking back on it, I wanted to tell Ryan, “I told you so.” So I did.

Note that my dreams of a finished basement quickly vanished with this episode.

My advice to you: Find out if your insurance covers ANY type of basement water damage. Does it cover if the sump pump breaks? What if its not broken and just can’t keep up? What if water comes through cracks in the foundation? These are all questions you should know NOW, not when the issue happens. You’ll thank me later.

Since our basement was NOT finished, our losses weren’t as bad. The neighbors on our street also had water. One of our poor neighbors did have a finished basement without coverage. So sad.

My biggest loss was my scrapbooks. I was able to dry out the pages, but its just not the same. Dumb of me to put scrapbooks on the ground in the basement. Lesson learned.

That night, we saw on TV our SMALL little town on the metro local news channel. I had to take a picture of it. Mike Thomsen, this would have been nice to know before the rain.

Not expectng a real answer, I asked Ryan, “Why do you think this happened to us?” Ryan responded, “Someone upstairs is telling us to finally clean our sh*t up.” No comment there.

Let’s end on a happy note. Here’s my birthday girl ending her birth “week” celebration (we sang happy birthday to her every day this week). Can you guess who her favorite Sesame Street character is? 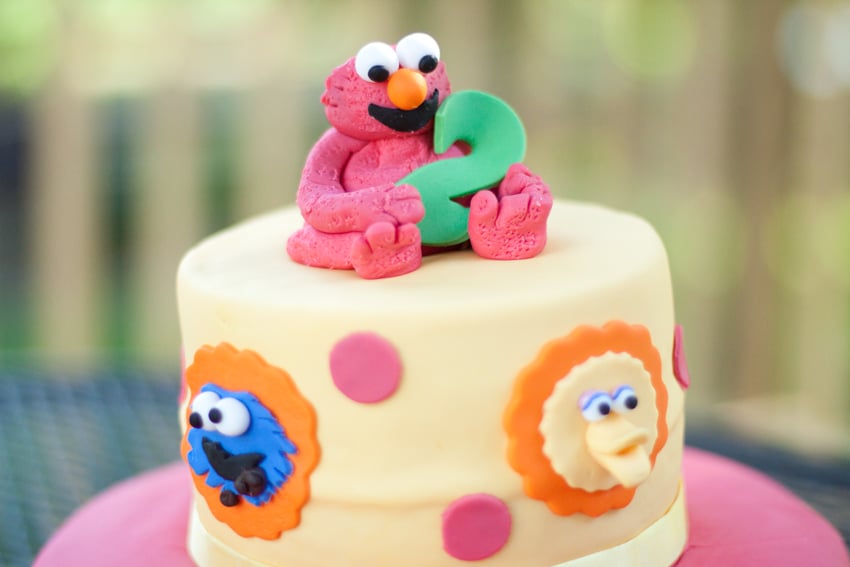 Grandma and Grandpa also got them a wagon. You can see how much they loved it! 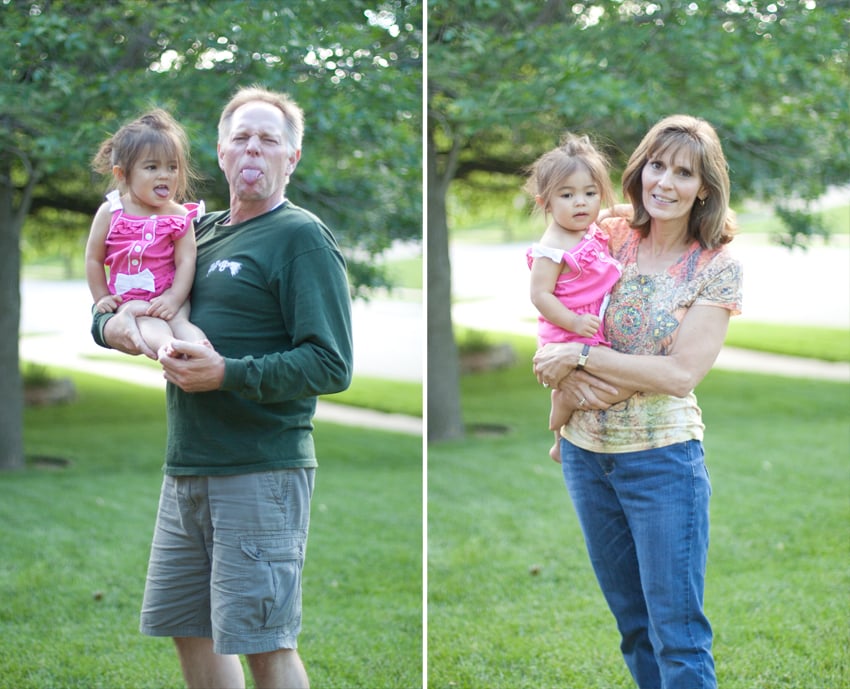 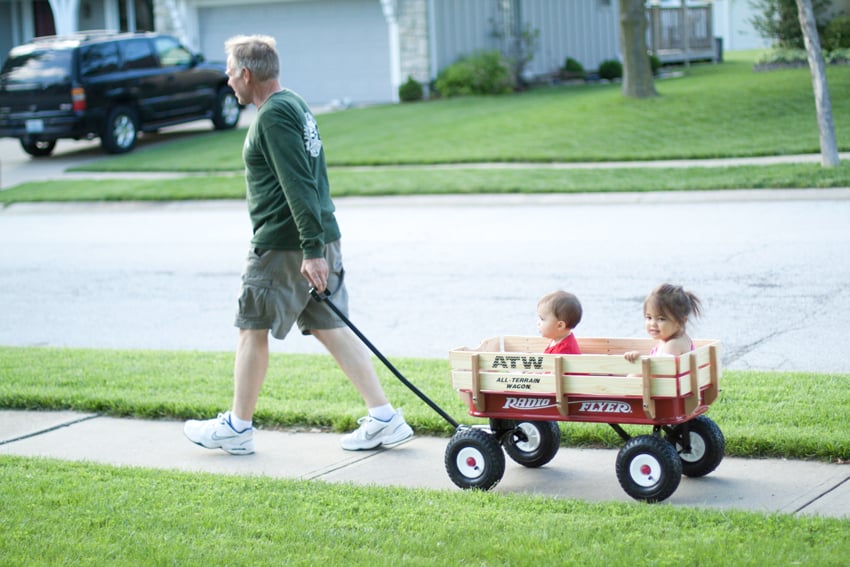