Ikea Grand Opening in Merriam, Kansas A review and walk through.

Today was the official media press tour for the new Ikea in Merriam. And I was invited!! I’ve probably been talking about this for weeks. My husband rolled his eyes when he found out that I took a vacation day just to be one of the first Kansas Citians to tour the 40th Ikea store. Yes, its that big of a deal.

Not only would I be adding iconic Ikea pieces to my furniture wish list, but I’d be rubbing shoulders with the Kansas City media and was secretly excited to see some of the local well-known news anchors. I know, I’m dorky. 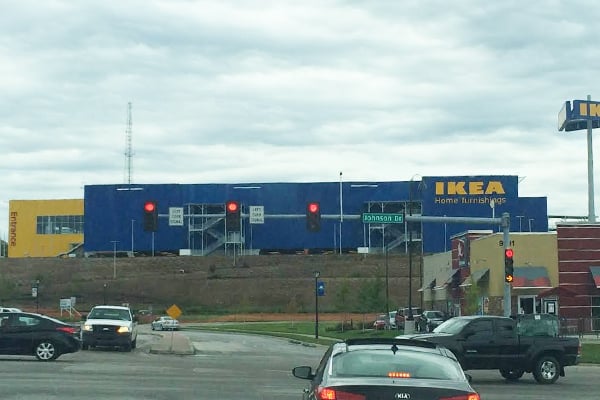 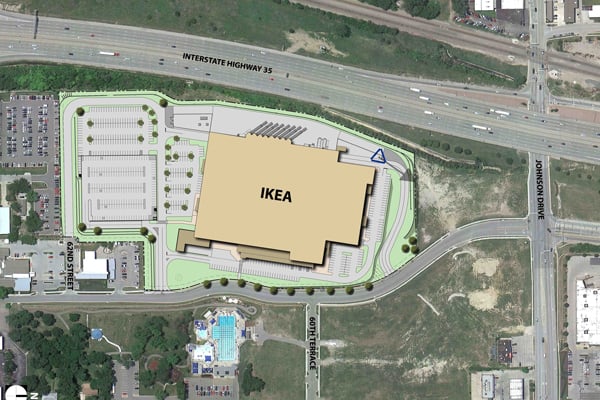 When I arrived, I went up the escalators to a small hallway greeted by another set of escalators. On this level, there is a Children’s Play Area called “Smaland” where you can drop your kids off for an hour while you shop! I’m told you are given a buzzer in the event that you are needed. Did I mention this was free? Can we say “they’ve thought of everything”?

After a bit of waiting, we were invited to a small luncheon. It was great because I was able to hang out with some fellow bloggers Mandy, Erin, Megan, and Angela! 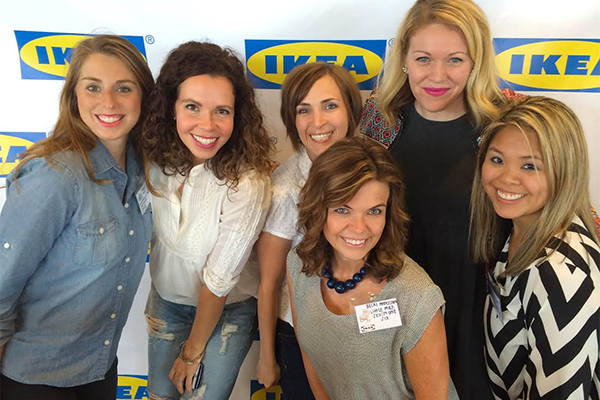 The store manager and the marketing specialist greeted us and talked about a few of the awesome giveaways the week of the grand opening on September 10th (next Wednesday).

On Wednesday, the first 40 adults in line will get a three seat sofa (which is on my list to buy!) value of $400. The next 100 that day will get an arm chair. The first 2,500 would get a random envelope that could contain vouchers for food all the way to $250 gift cards. Also, if anyone has a birthday on 9/10 and can confirm it, they can get a $40 gift card (40 representing the 40th Ikea store). How awesome is that? At one point, they did say that someone would win a year’s worth of meatballs. I’ll be honest, the meatballs weren’t that great (possibly because they were sitting out for a while). You should give it a try anyway, don’t take my word for it. I didn’t even eat the cavier they were serving (fish eggs, yuck). 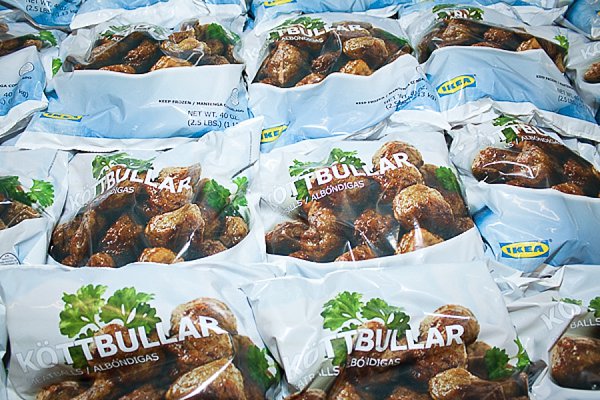 After lunch, we were greeted by an amazing dessert table! Don’t these look delicious?! 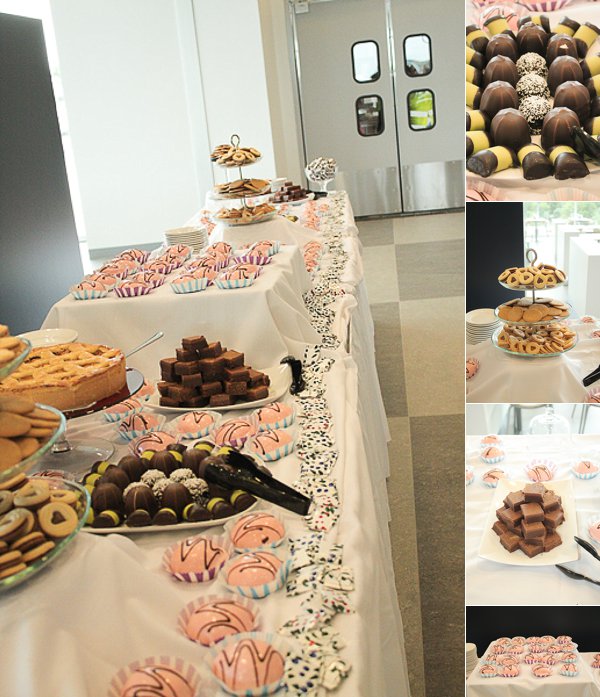 After lunch, I was paired up with an Ikea tour guide, Anthony, along with another fellow blogger, Mandy at SugarBeeCrafts. We were told to “stay on the natural path” (basically, lines drawn on the ground) unless you are an Ikea veteran. Mandy is a veteran, I obviously am not. Anthony said he has had customers that have gone AWOL from their family before in their stores because they took the “short cuts” (an entry way between showroom floors that is not on “the natural path”). Not sure if it was a joke or not.

Before we started, he explained how the store was laid out. His first tip: stop and get a pencil as well as a sheet to mark down the purchases that you would want to make. He stated that the layout is a “showroom” and that there are tags on most items so that you write down the number and pick it up in the MarketPlace (explained later). So newbies: make sure you grab a pencil and a sheet (positioned right before the first display) to mark down your purchases before you start shopping! 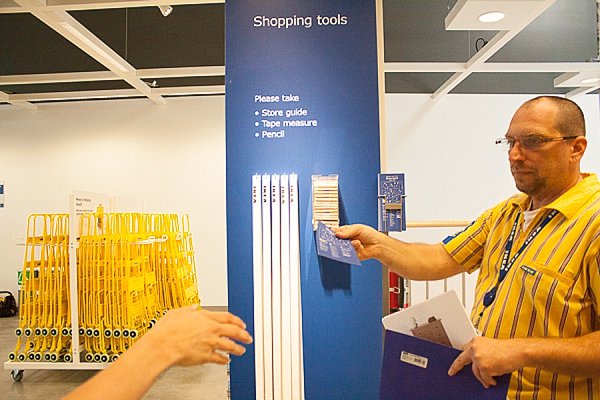 As we started our tour, I was greeted by a couch that is VERY similar to my Pottery Barn Grand Sofa that I got (read about that here).

Below are are different versions of it that I saw. I LOVE the look of these couches!!! They are sooo affordable. The one above is $350 (make sure you sign up for their free Ikea Family membership, you get discounted pricing on some items if you do). Pretty sure Mandy was laughing at me secretly because I ooohed and ahhhed so many times.

In the images below, you’ll see some of the other fabrics that they have. They are all washable – so great for people with kids!!!

Pretty sure I’ll be getting one of these chaises for our family room upstairs. 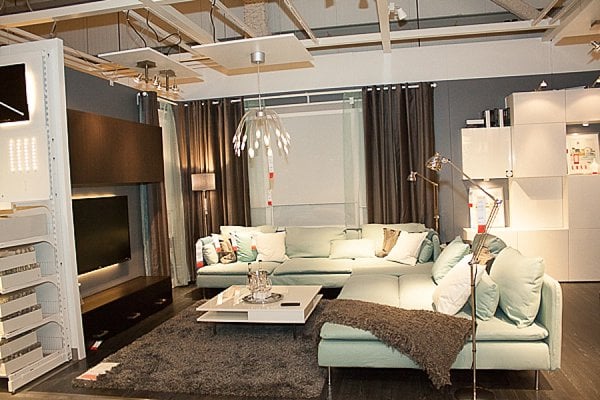 I’ve always wanted a “living wall” and Ikea has made it super easy to do that!

What I didn’t see there was a version of my beloved banquette that I’ve been eyeing (read about that here). However, when I do get it from Ballard Designs, I plan on buying one of these chairs for the opposite seating! 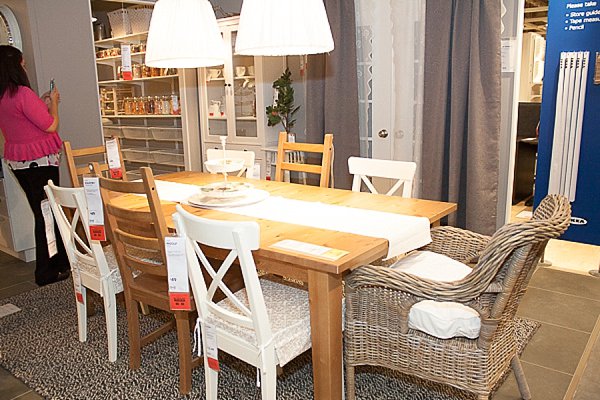 My scrapbooking room has not been touched since we’ve moved in. I’ll be honest, I have yet to scrapbook since my oldest has been born. Ikea has awesome products for those that want to organize that. Pretty sure you scrapbookers out there are eyeing the multi-shelf that is perfect for 12×12 scrapbooking paper! I will say that Home Decorator’s Collection has similar products in a wider variety of color here. 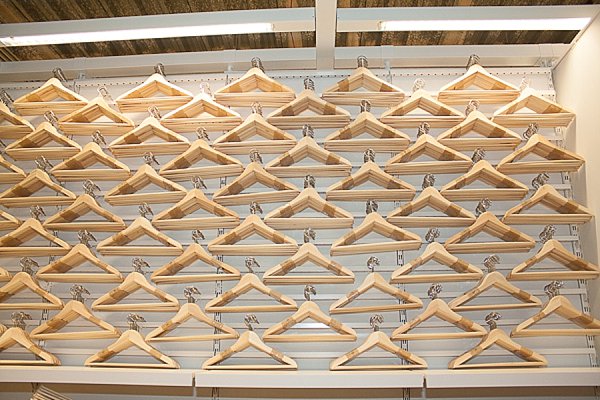 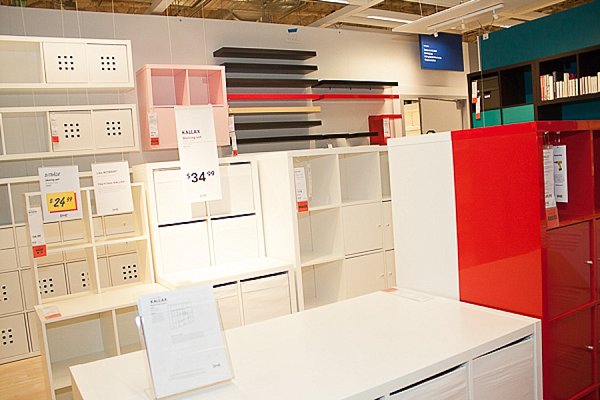 The shelves below are perfect for basements or garages. Remember the work Ryan put in for our basement shelving? We won’t tell him he spent 10x more on the wood. Ryan’s custom shelving was a bit more stable, but for $30 bucks, you can’t beat that!

They also have a small collection of cool fabric that you cut YOURSELF! They are fairly reasonable from $2-$9 a yard (as compared to Ballard’s $29 a yard).

One area that I’m really excited about is their bed textiles. Amazing quality of bedding, sheets and comforters for an awesome price. Pretty sure that I couldn’t even MAKE some of the stuff for that price (even with a 50% off discount card at a fabric store).

Now, onto the kid stuff. How cool of a playroom would this be? 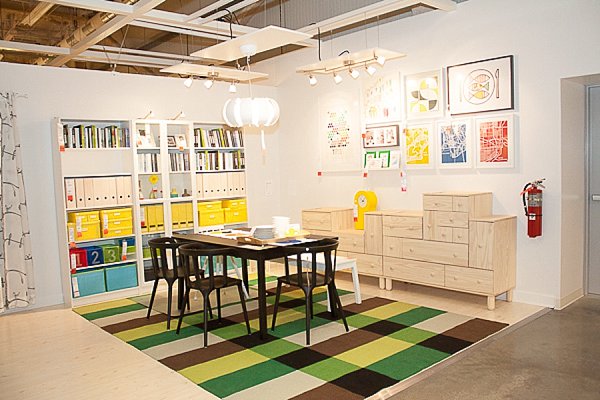 The kids furniture is very affordable. For those that are expecting a baby, your timing could not have been more perfect. There is soooo much nursery stuff to pick from, its unreal.

This is soo stinkin cute. These are coat hooks! How fun! 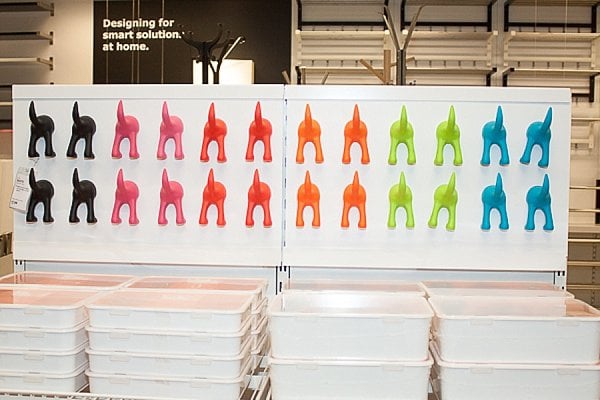 I’m pretty sure in the next two years as we get invited to birthday parties, I have a feeling that I’ll be seeing a lot of Ikea gift wrapping! How awesome is their gifting area?

We then arrived to the lower level, which is the Marketplace. Its where you pick up your products. You basically self-serve. So if you plan on buying something huge, make sure you bring someone to help! If you don’t want to or can’t, you can pay a flat fee for someone to grab your items and also deliver. Not bad 🙂

Also, on this floor is an “As Is” area where items that have been returned or slightly damaged. I’m told that there are often pretty good deals here. The best part: its already assembled 🙂 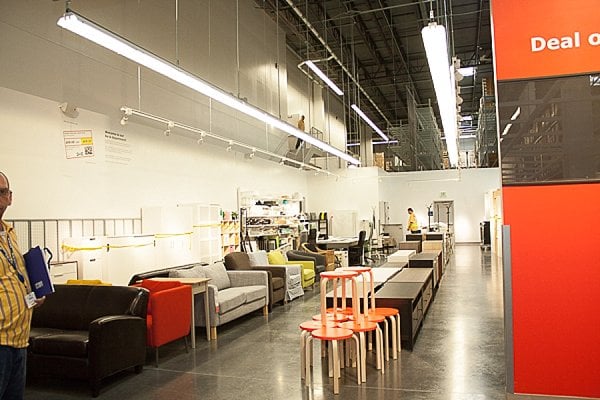 The tour ended very sweetly, with me taking home a box of six of their amazingly scrumptious cinnamon rolls, which were 1000000x better than their meatballs everyone raves about.

Ikea, I look forward to giving you my money.