When we first moved into our house, one of the first rooms I wanted to get done was the playroom. This was because I knew they would have a ton of toys scattered everywhere, and I wanted a single place where I could store all of their toys.

Five weeks ago, I told Ryan I had a brilliant idea of having a bunnies/chicks mini photography session for my clients. So that I meant I HAD TO HAVE a studio. And five weeks did not bode well for me knowing the pace at which Ryan works AND the fact that he won’t let me paint (don’t get me started). So to light a fire under him, I was able to secure 8 sessions on a March 23. I told him he had the day before that to get it done. With two little girls who get into EVERYTHING and a husband who won’t let me paint, this was going to be a daunting task.

The studio room was the spare bedroom, which was diagonal from the art room. This was great during this project because the girls loved playing in the art room while Dad painted. It WASN’T so great for me because they started playing with ALL of my stickers. I couldn’t say no because I didn’t want them pestering Ryan (since a single delay with him would just be multiplicative on how long it would take him to get the room done). So while Ryan painted, the girls played with my expensive scrapbooking stuff. Thankfully, a few years ago, I started digitial scrapbooking. Note to self: buy the girls some cheap stickers.

While we were working on the studio, I would often say/bargain/yell, any combination of the following:

It was always with exclamations (another way for saying me yelling).

We were fairly close to finishing the studio one night after work. I was facing another wall trying to get something configured. Ryan was also trying to configure something for the wall brackets while sitting with Ansley and Aubrey. All of a sudden, I hear Ansley say, “Daddy, you make a mess! Go to the art room right now…time out Daddy!”

I’m pretty glad I was facing the wall opposite of Ryan so that he couldn’t see my face. I’m pretty sure it was pale white. So many thoughts ran through my mind:

I know for a fact that Ansley repeats some of the stuff that her teachers say (pretty funny stuff), but when its MY words, its not so funny. I call this a milestone because it illustrates how much of sponge her brain is right now.

Lessoned Learned: Stop yelling so much. Not because you don’t want her to embarrass you unknowingly at school (well, maybe), but because I need to teach her how to communicate without resorting to yelling.

Parenthood, you learn something every day.

Here’s an outtake from a test session with my new backdrop with Ansley as the model: 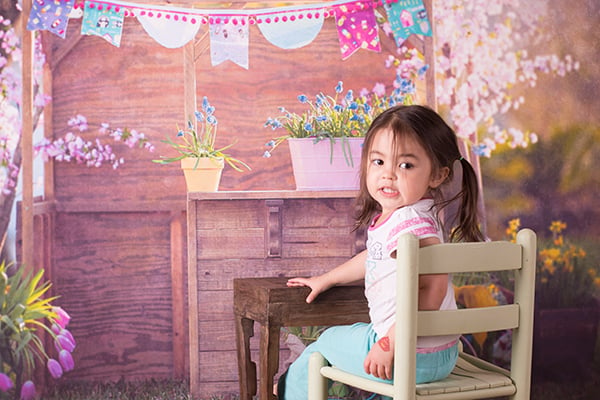 Since this post was all about my oldest’s milestone, I have to be fair to the other child. So here’s a video of Aubrey dancing to “Don’t Worry, Be Happy”. It will make your day.