This is really embarrassing, but I'll admit it to the world. Until late last year, Ryan and I owned two TVs: his 13 inch TV from college and a 36 inch tube TV that weighed about 75 pounds. I'm pretty sure my parents and friends made fun of us behind our backs (and some in front of us).

When we purchased our house last year, we also decided to upgrade televisions finally. So I did some extensive research on Plasma vs. LCD vs. LED (Ryan didn't want to have any part of this "research") and I found that the best television on the market was Panasonic Plasmas. In the end, we decided on a Samsung because it was less expensive and appeared of the same quality. This TV was a massive upgrade.

When we got it delivered, I soon realized that we really needed to paint the wall before we mounted. Of course, Ryan took a whole good year before he finished painting the wall. So we had this 60 inch TV in our bedroom. Let me just tell ya ... it was pretty awesome considering what we had before. (Although, when I looked at the ridiculousness of the size of the TV...the phrase that kept coming in my head was my father-in-law's: "The size of your TV has a direct correlation to the size of your behind.")

Just recently, Ryan finished painting the wall. Our next project was to mount the sucker. I'll admit - I didn't do anything but at the very end...helping him lift the TV onto the mount.

We decided to base how high the TV would be mounted by the height of the TV console. Since I wanted decor on top of the TV console, I wanted 2.5 feet space between the top of the console and the TV. In the end, the TV ended up being a "little" higher than we would have liked. Its okay though. The added benefit of a too high TV is I can see it while I'm cooking in the kitchen.

Here's the hubs after he cut out the drywall and put the plastic slots for the cables. As an engineer, I should have guessed, he was very meticulous in measuring. 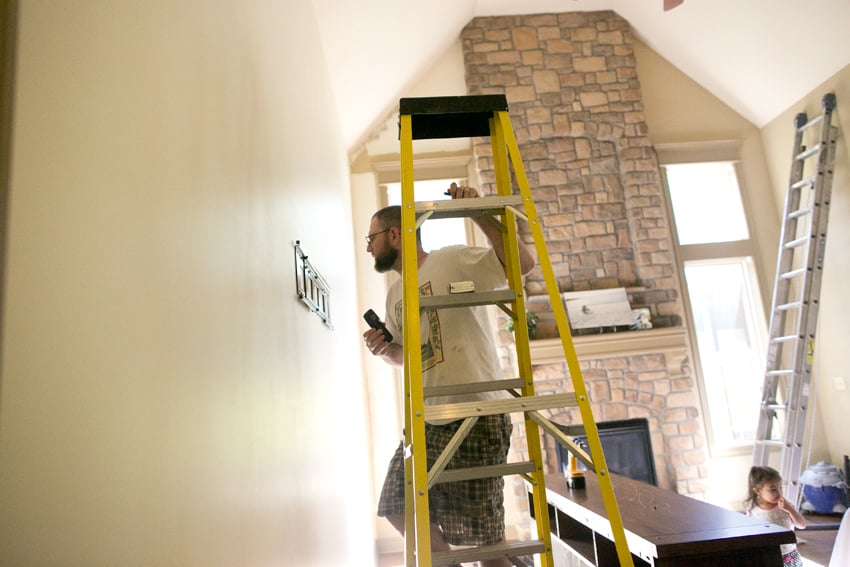 In order to put the cable from the top hole to the bottom electrical outlet, Ryan had a genius idea that I would never have thought of. He used fishing line to fish the electric cord from one hole to the other. Genius! 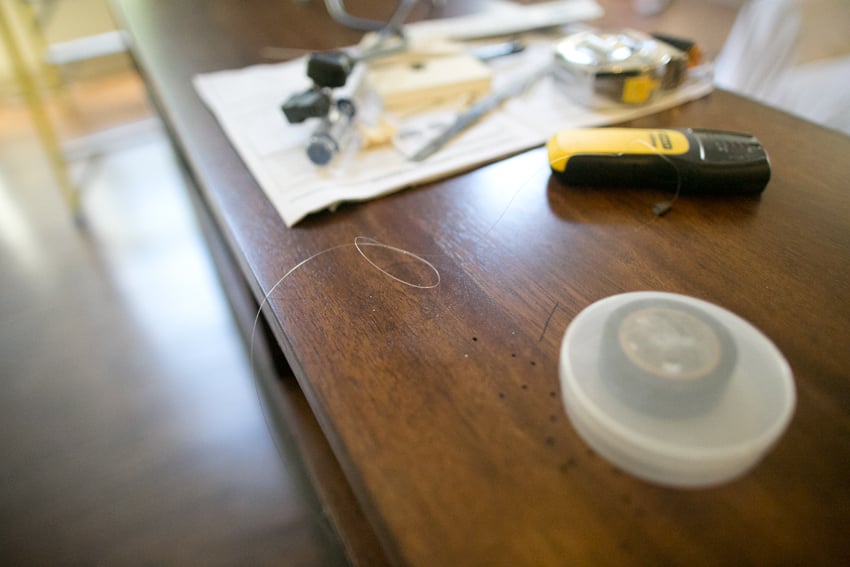 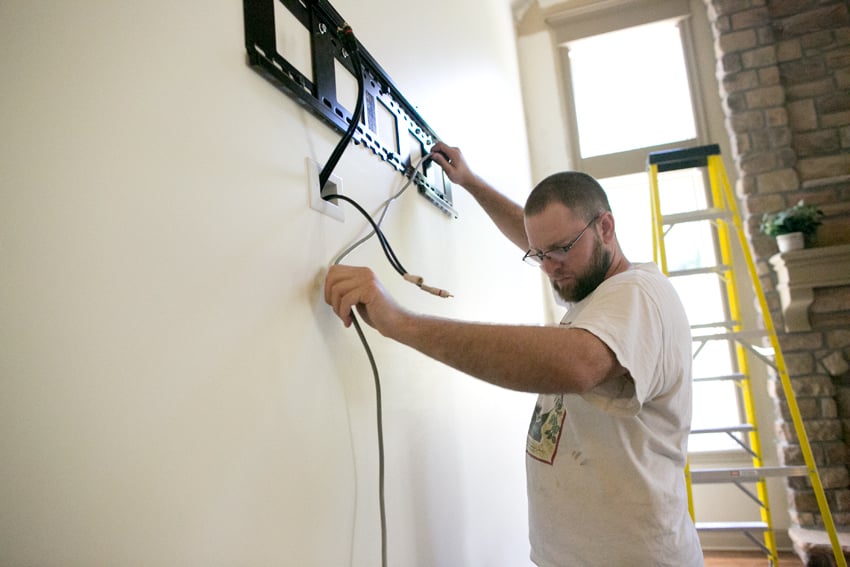 After he got all the wires in, we had to hoist this bad boy in the air. I had no clue how this thing was supposed to sit. I thought you had to screw the TV into the mount into the wall. It turns out that to "mount" a TV means (a) putting brackets on the wall, (b) put brackets on the actual TV that has hooks, and then (c) you hook the TV into the wall. Its like putting a jacket on a hook. At first I didn't think it was safe. I did some research and found that it was totally safer than putting the TV on the flimsy stand they provide you with.

I've gotta give my husband some street cred though. The guy knows what he was doing. He NEVER youtubes instructional video when I ask him to build or put something together for me. He just is so mechanically inclined its unreal. What girl wouldn't want a man like that?! 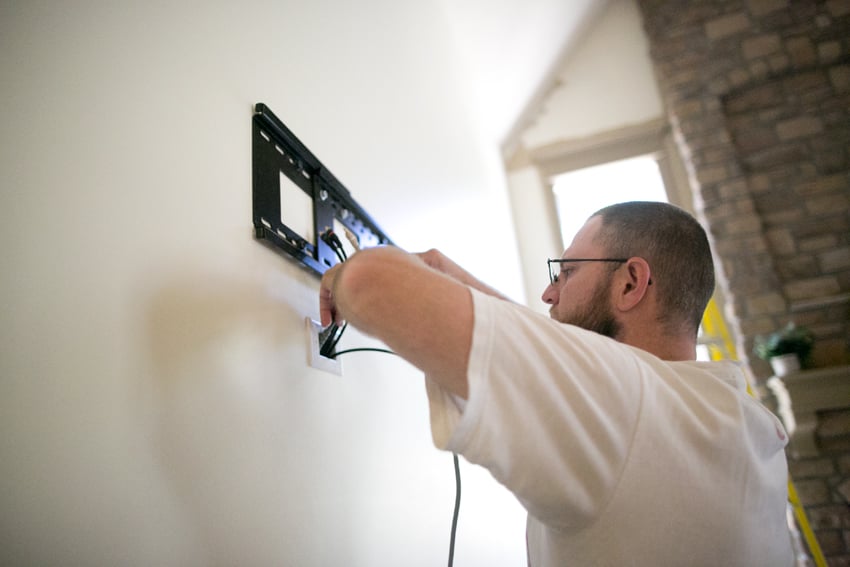 Boom! Check it out - its hung! (No console photo yet...when I finish decorating, I will share.) 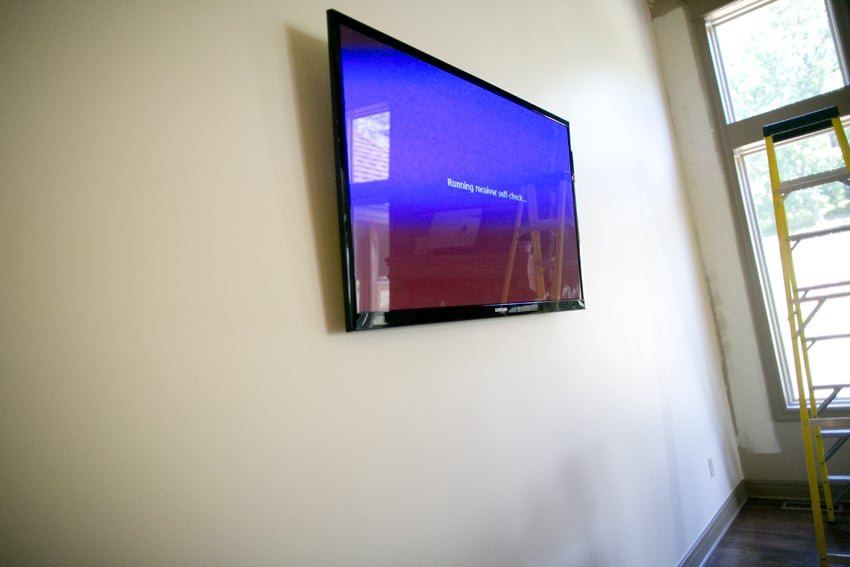 Here's my kid enjoying the fruits of our labor. You can tell a lot about our lives from the images in the background. Did you notice the following:

1. Ansley eating in the background in her high chair
2. The trashcans are sitting on top of the table (so that the kids don't mess with them
3. My awesome Pottery Barn couch now has a slip cover over it.
4. We don't have a lot of seating in the kitchen 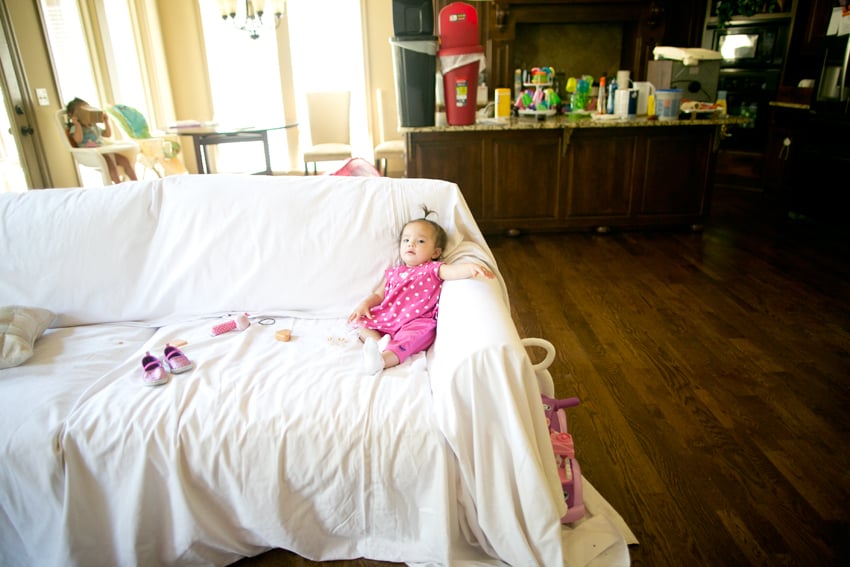 I can cross SOMETHING off the honey do list 🙂