I’ll admit it. If you would have asked me a few months ago how I felt about Ryan leaving me by myself with my own two kids at home while he did one of his hobbies, I’d honestly say I’d be terrified. My kids are very active and very impatient, as all babies and toddlers are. Remember, these little sisters are only 13.5 months apart – so it was hard giving both of them the same amount of attention at all times. When babies start outnumbering the parents in my house, it gets a little chaotic. I still have an amazing respect for daycare teachers and single parents who do this day in and day out.

At the beginning of this year, Ryan worked out a deal with me about our hobbies. He said I could do photography whatever day I wanted to, including weekends, no questions asked. He would watch the girls. But when hunting season came around, he would be able to do the same. He said I was getting the fair end of the deal because hunting season was only at most 5 months long. So, I took his deal. I did my thing over these last several months: weddings, engagement shoots, first cake smashes.

Sure, there were times when I had to watch them by myself when Ryan had to run errands. Don’t tell Ryan this, but I usually told Grandma and Grandpa we were going to come visit them, when it was actually me secretly imposing their help to watch the kids. I wouldn’t go home until I knew Ryan was going to be there. I’m pretty sure Ryan’s done the same thing with his parents 🙂

Initially, I secretly was ashamed at myself for being scared of being around my kids by myself. I felt like I didn’t live up to expectations of being a good mom – someone who was patient and able to handle their own children without help. A few months ago, I was reminded that I shouldn’t be ashamed. My own mother was completely exhausted by the time I picked up both my kids from her house on a day I sent them over there for 8 hours (her house was still a mess by the time I picked them up).

Now the kids are a wee bit older, I’m not scared anymore. Why? Well, yesterday was a good day without Daddy. I took them to get keys cut, shop for groceries, gave them naps, fed them . . . without any fussiness! Life is good. Now that Aubrey’s able to interact with Ansley and actually play, life is good. Two toddlers playing with each other = one happy momma (as long as we have tons of Dora snacks, yogurt, and cheese balls). Oh, and yes Grandparents, we’ll still visit you 🙂

I end this post with a photo. Here’s a photo of them having a blast just playing with unused diapers. 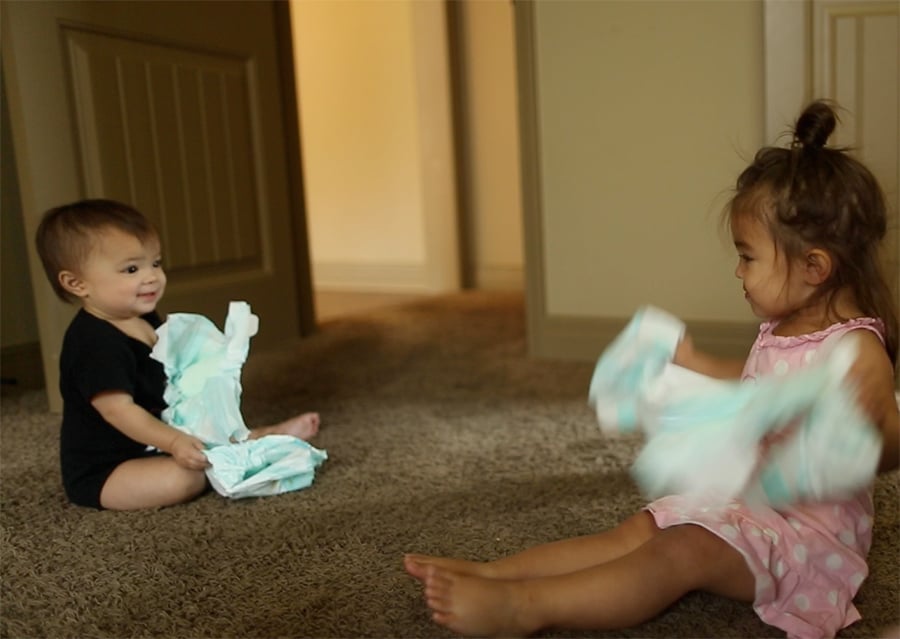