I’m going to admit it. Our family eats out WAY too much. Ryan was on a health kick at the beginning of this year where he ate nothing but organic and natural foods. He lost a ton of weight and felt healthier. But the TIME that it took to make his food took FOREVER. Our kids’ stomachs after school were not cut out for waiting. Call it our generation of instant satisfaction/gratification.

Since I work outside of the home, one of our go to meals are slowcookers. With my slowcooker, it seemed like I could only get it right when I was home watching it. If I put my food in before I left for work, I could guarantee a scorched meal or an unedible meal. Even when I put more water than necessary, my slowcooker was not cutting it for me. I also heard that the timers that were on most general slowcookers weren’t really delay timers, they were more of when to stop cooking. What I really wanted was a slow cooker that would delay the cooking so that it wouldn’t sit on “warm” for several hours. I wanted the cooking to “start” a few hours after I left.

Anyway, after googling around a bit, I found something called the Instant Pot. After receiving it, I will now say that it has CHANGED my LIFE! Just like the Hy-Vee online grocery shopping pick-up/delivery has saved me hours of time at the grocery store, this Instant Pot saves me so much time and energy as well as moving our family towards a healthier lifestyle.

What is a pressure cooker? What is the Instant Pot? Well, its a 7-in-1 (as its advertised), but I mainly use it as a FAST slow cooker. I know, I know – sound contradictory. So I just got this thing literally four days ago and have made five meals back to back with it.

When I say pressure cooker, its not your “canning pressure cooker” (its not meant for canning). That’s what I thought originally as well. What its meant for is being able to create this pressurized cavity for your food to cook in a FRACTION of the time that you would have with a slow cooker. Its freaking amazing.

With my VERY BAD experience of buying an “As Seen On TV” not-to-be-named convection oven that had amazing reviews online, I was super hesitant. To this day, Ryan does not let me live down my $200 impulse buy.

Unboxing the Instant Pot IP-DUO60 7-in-1

I just wanted to share how the Instant Pot arrived after ordering online. Here’s the box it came in. 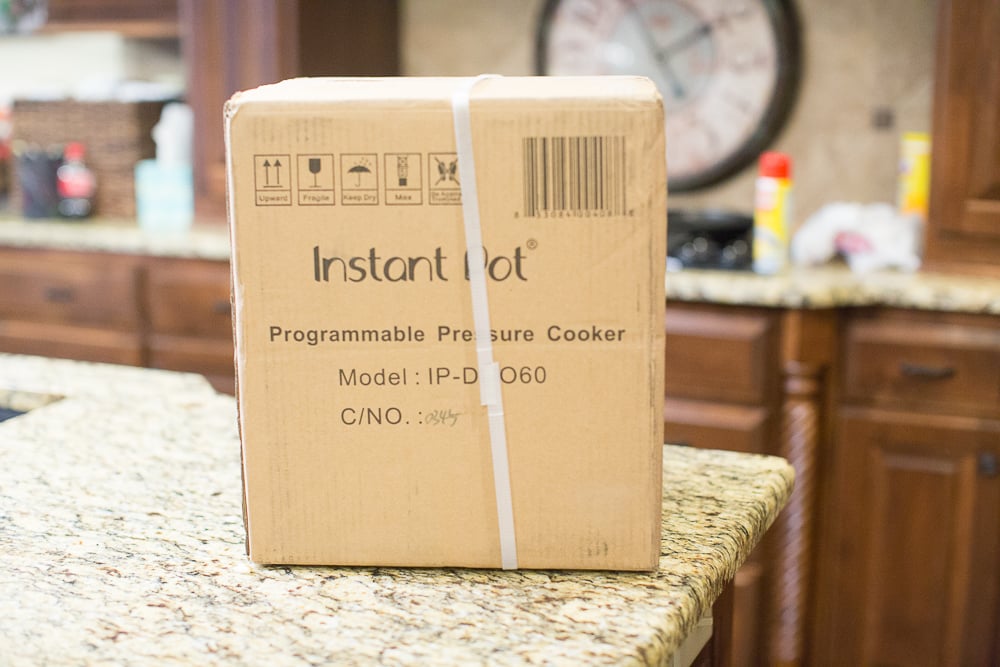 Here’s what was inside: 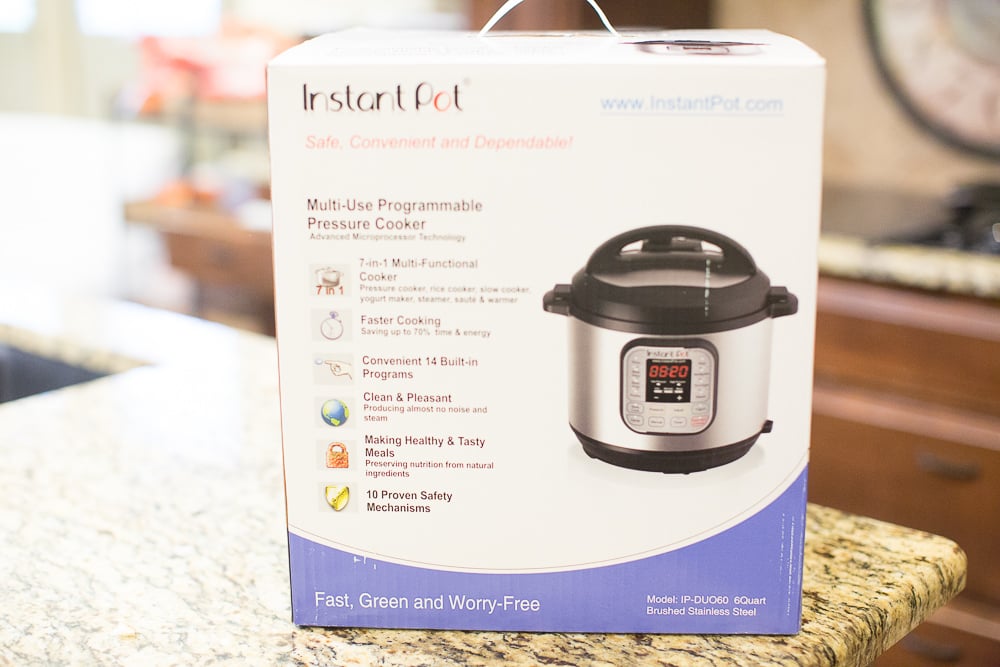 These are the manuals that sat on top of it when I opened it up: 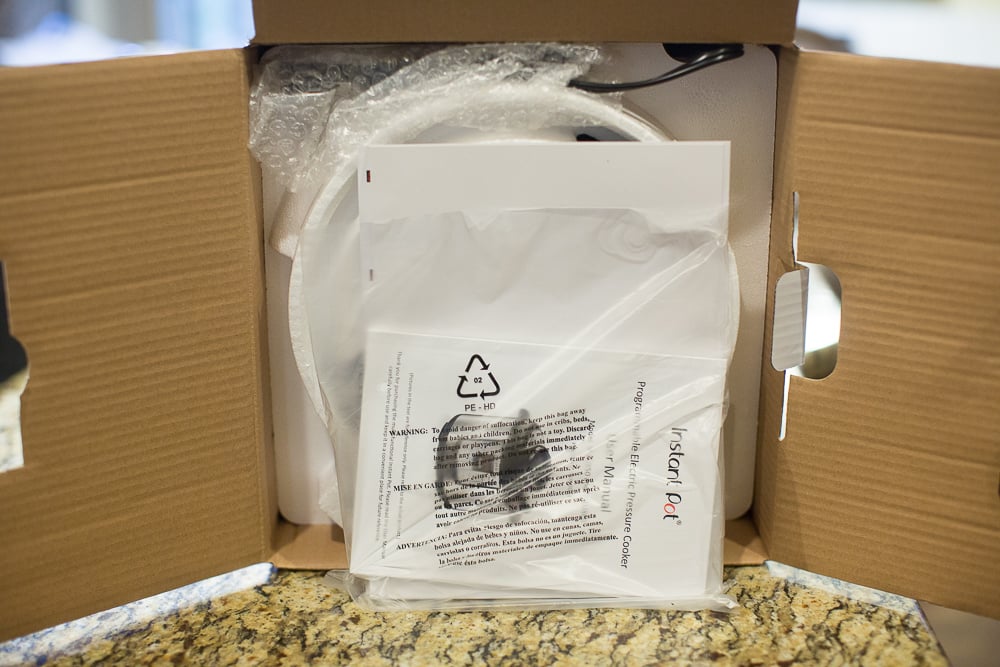 It comes with 2 scoops, a wire rack, a user manual, and a recipe book (I got all my recipes from the Instant pot Facebook Community conversations. Yes, they have an amazing Facebook group. Almost like a cult.) 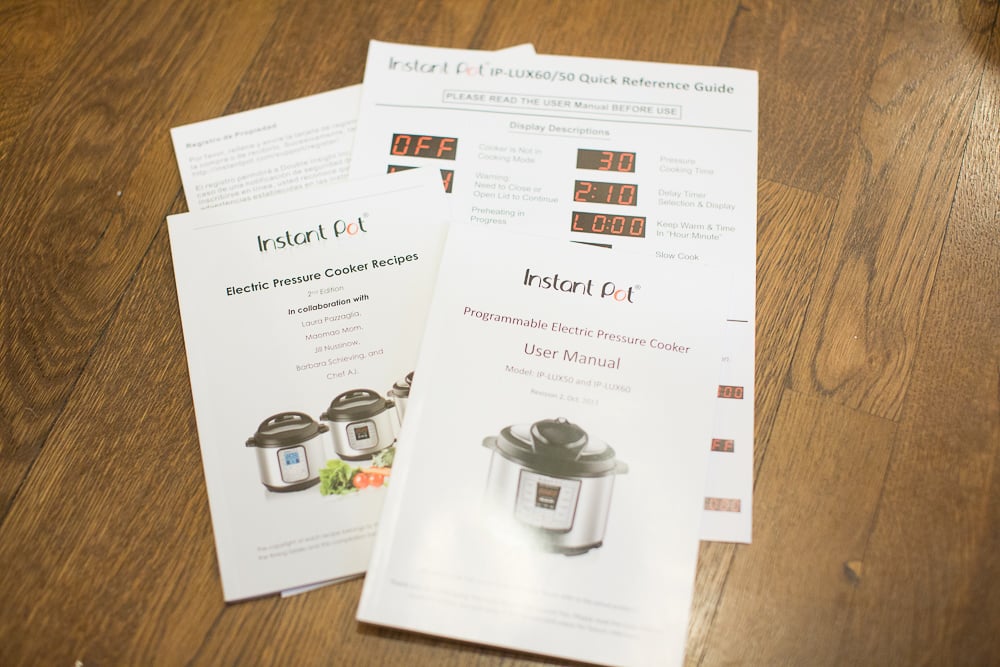 Truth be told, and I can’t believe I’m sharing this: Once I opened the Instant Pot lid, I didn’t watch how it was held together. When I tried closing it, I couldn’t figure out how to close it. I felt like an idiot. It took me 20 minutes. I didn’t want to hear the crap I’d get from Ryan, so I googled it. I finally figured out that the lid sits INSIDE the ring and closes/seals from left to right. You probably will fare better than I because it was obvious to everyone that I YouTubed “how to close an Instant Pot” (nothing really came up, it was more unboxing videos and coming to the conclusion that I’m … well…I’ll just leave it there).

My first meal was going to be shredded chicken tacos. The NIGHT that I opened the delivery of the Instant Pot, I seriously had not planned out dinner. What I had was three chicken breast a quarter thawed, a few flour tortilla shells, cheese, and a bit of salsa. That’s it.

I put my basically frozen chicken breast along with 2 cups of water. 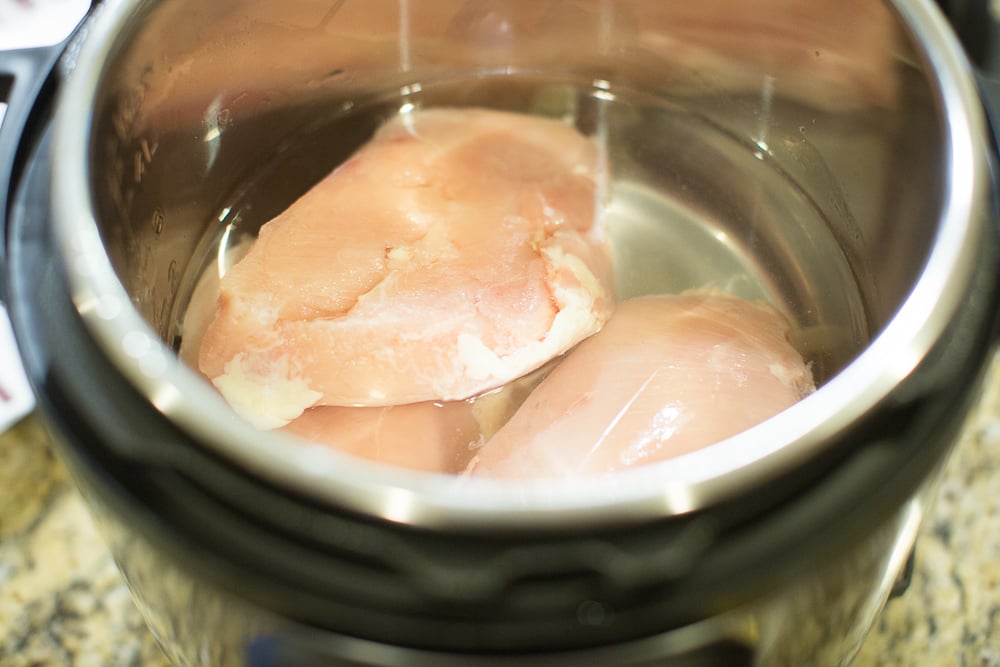 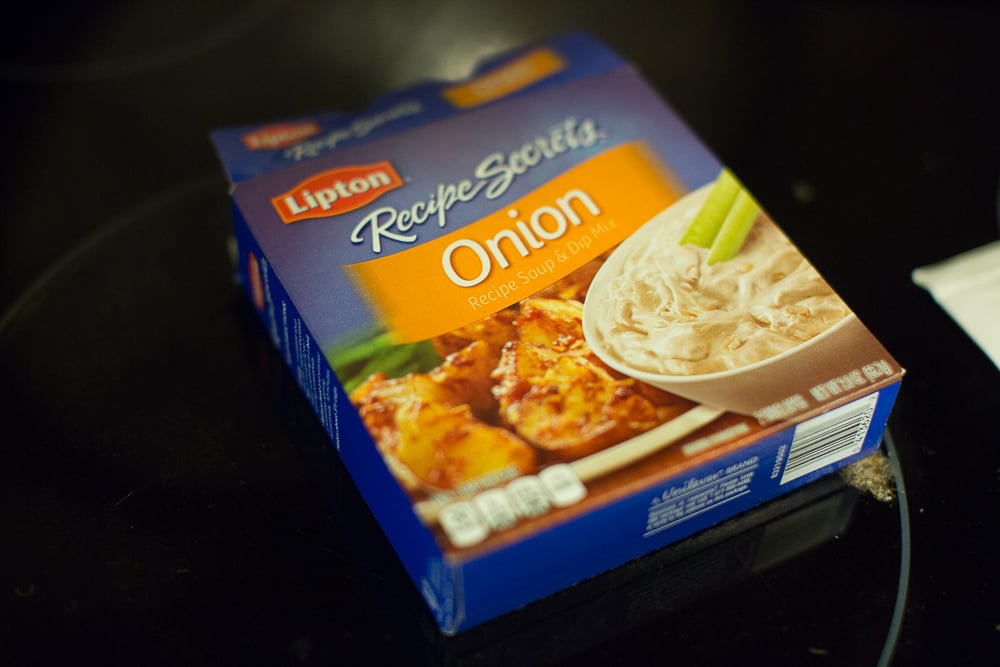 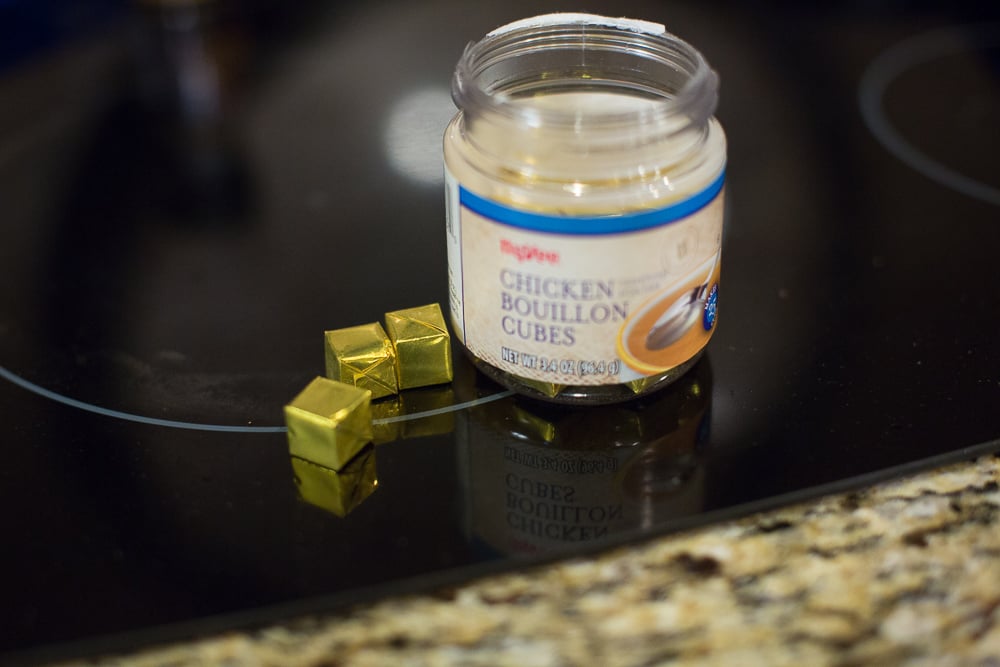 Plugged the sucker in. Closed the lid (this time, took me half a second). It made a sound.

I closed the vent to “Sealing”.

Next, I clicked the “manual” button, hit the +/- until it went to five minutes. (I knew it was 5 minutes based on the conversations about broth and chicken that went on Instant Pot Facebook Community).  The display said “On”. It took about 15 minutes to pressurize – all this time, it still said “On”.

Then, it said “5” on the display. I could hear it pressurize. And then it beeped (I think). I then used a wooden spoon to move the valve from “Sealing” to “Venting”. Out shot out a ton of air, which I expected since it is a pressure cooker. It took about two minutes to do this.

Moment of truth, I opened the lid. It smelled sooo good. And it tasted absolutely flavorful and delicious. 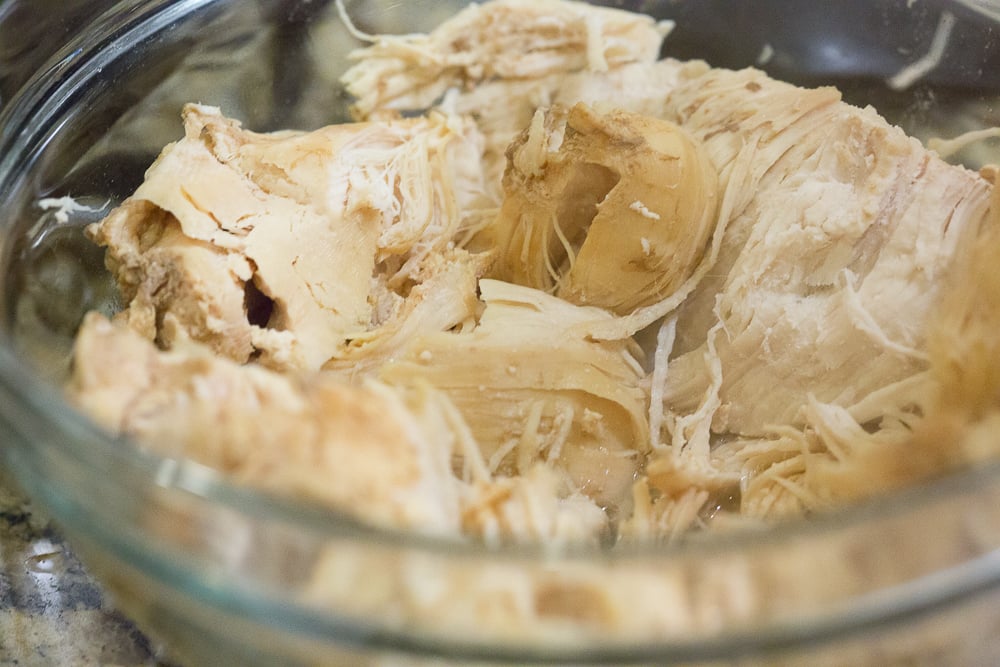 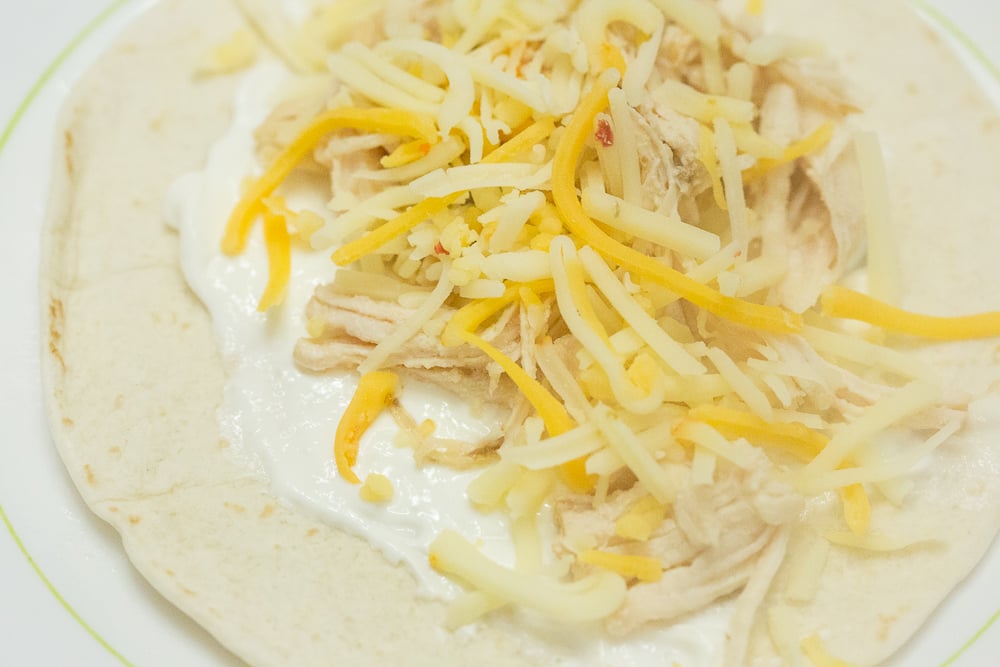 I will spare you the details on the step by step on this one. This meal took the same amount of “cook” time, but what it did save me was baby sitting the noodles, straining the noodles, buttering the noodles, washing the second pot for the noodles as well as the strainer. In this meal, I used the “Saute” feature which allows you to cook it in the same pot.

Here’s the ground chicken that I cooked in “Saute” mode. 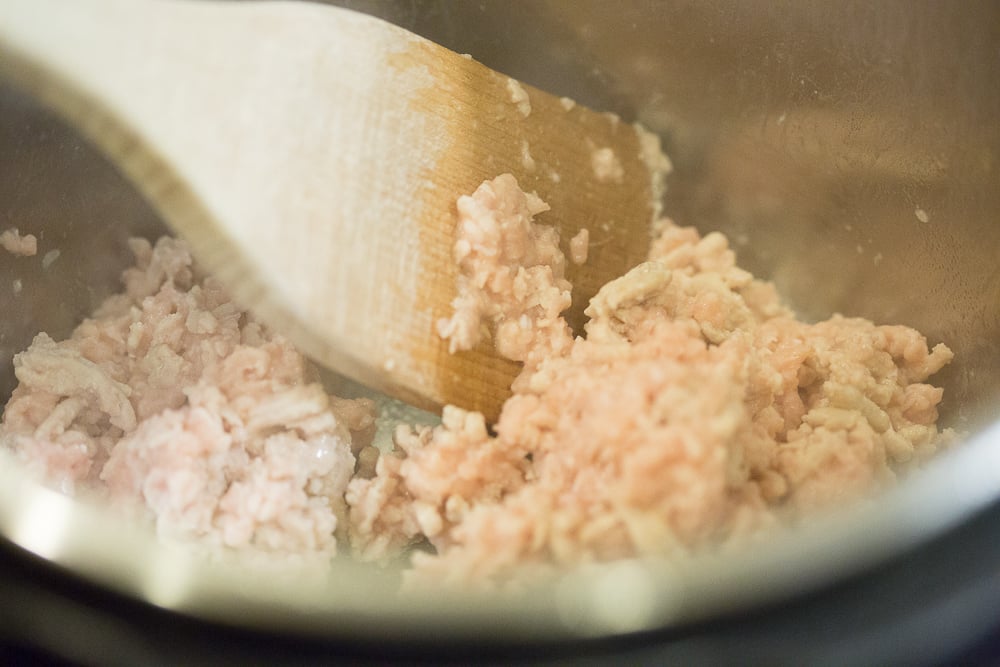 After it was browned, I added onion, UNCOOKED noodles … 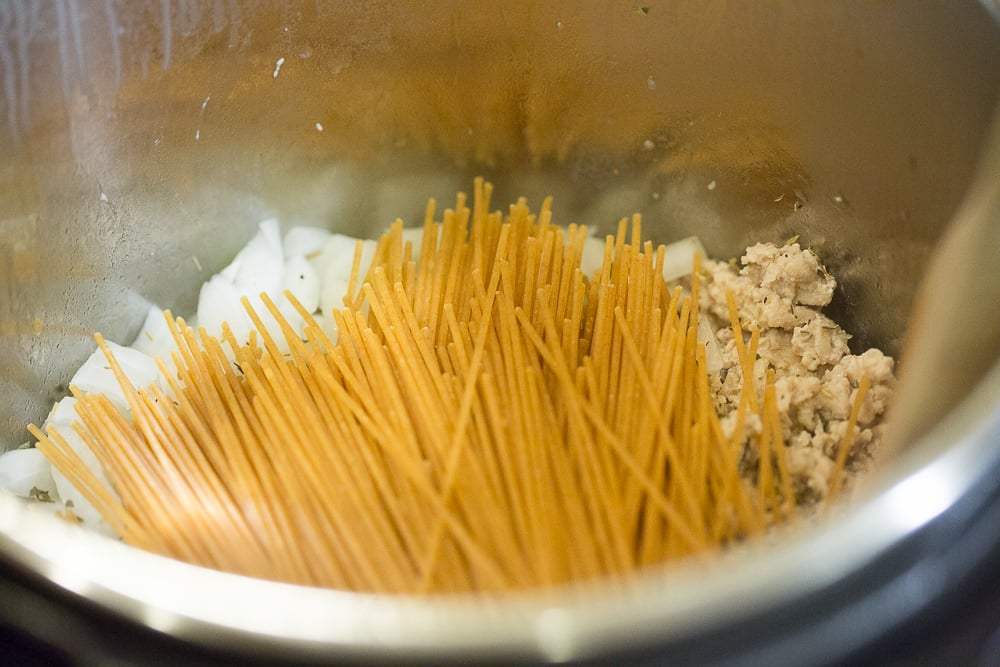 … pasta sauce, a jar of water (using the pasta sauce jar), and frozen green bell peppers from our garden this summer. 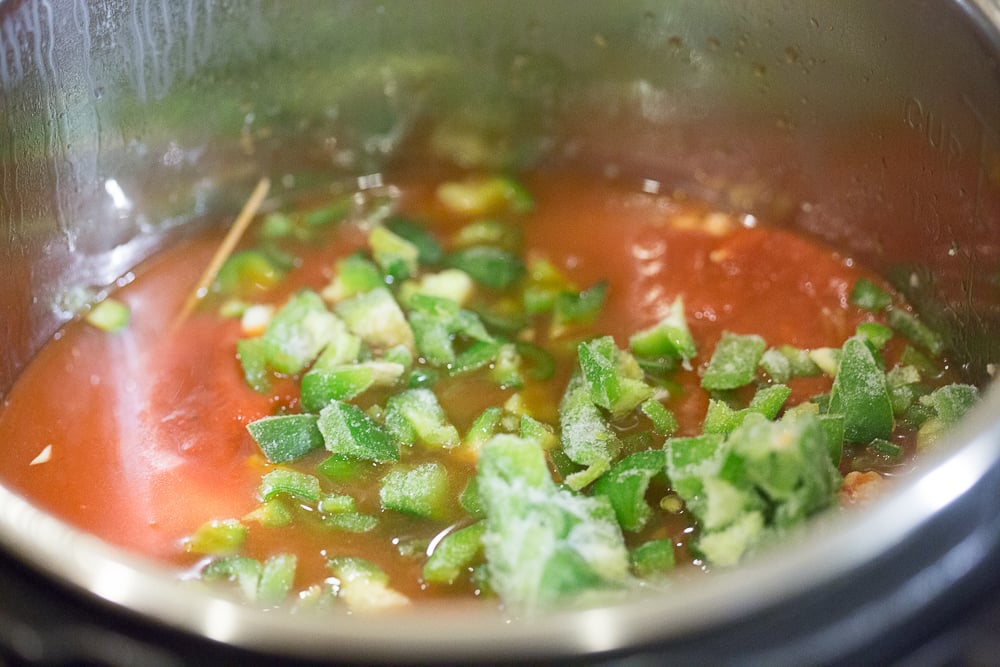 Here was the time that I started pressure cooking it on manual at 5 minutes. 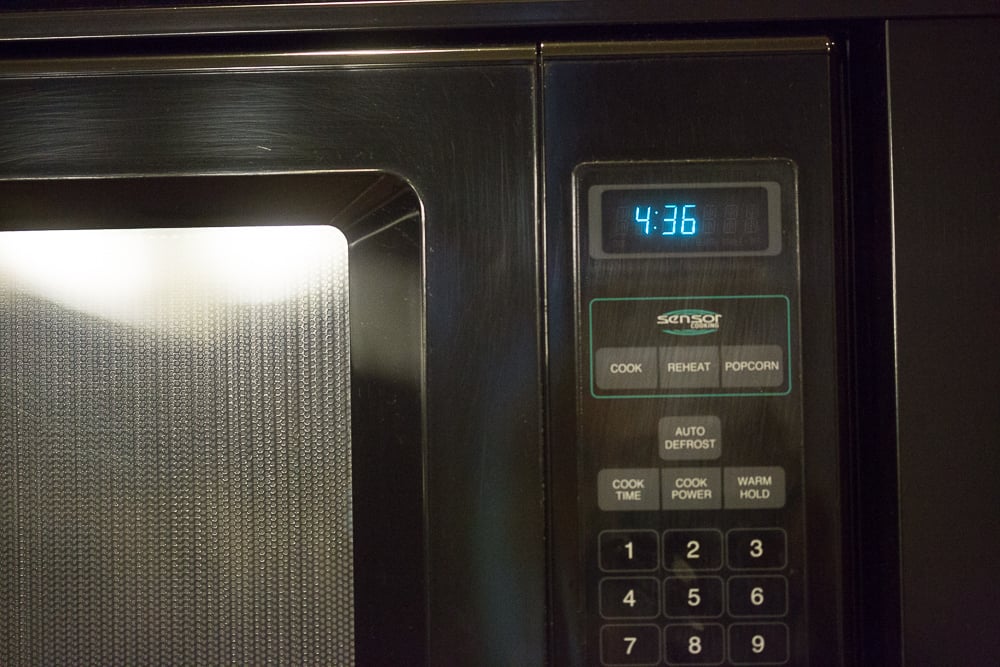 Here was the time that it was done pressure cooking (and me venting it). 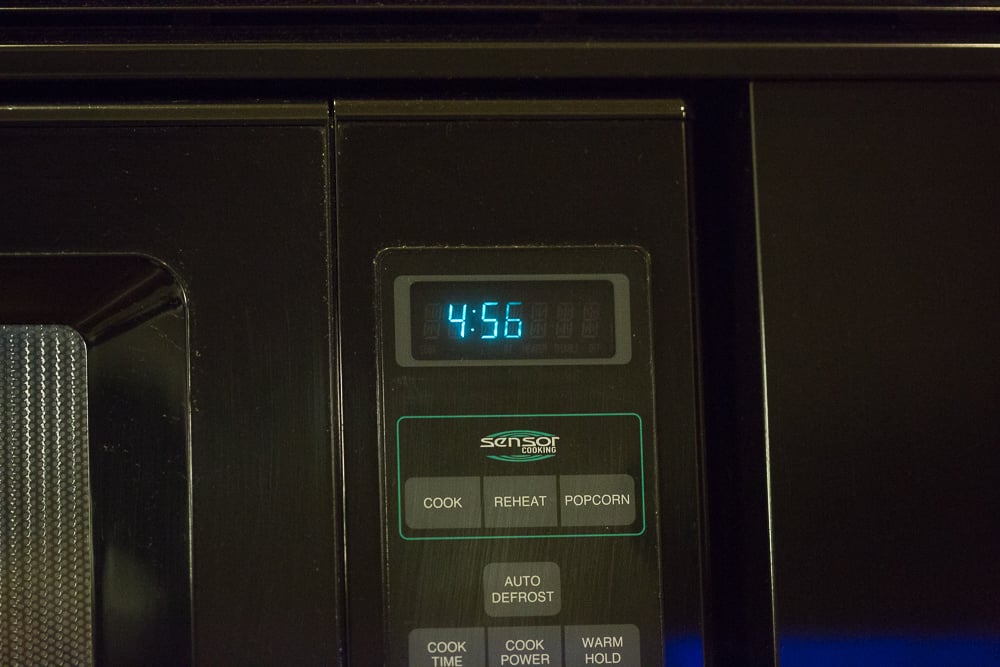 This is what it looked like. The noodles were PERFECTION. Not slimy – it was perfect! 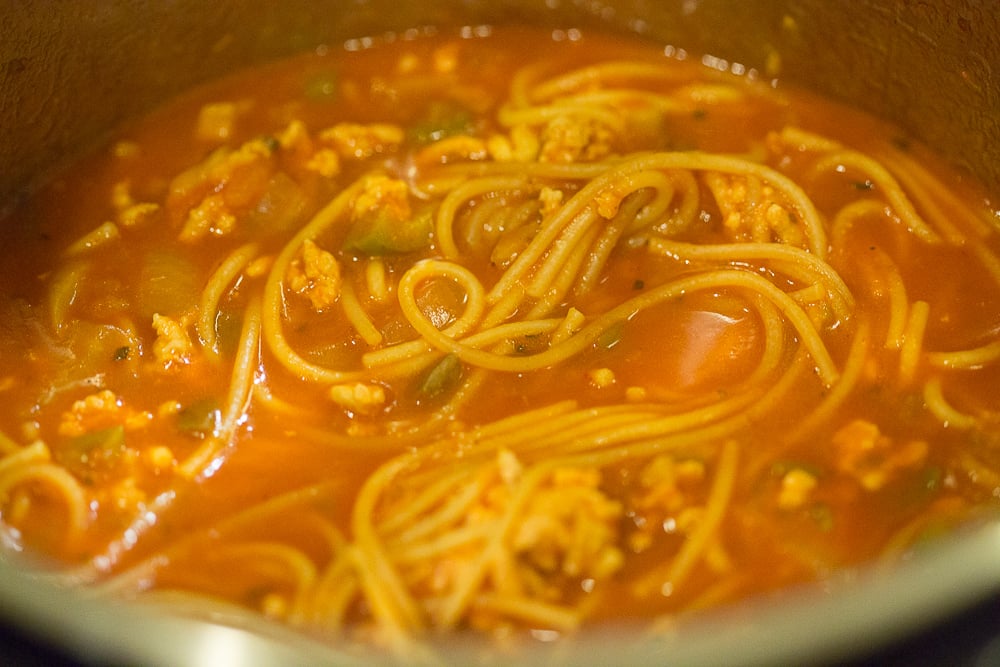 I don’t have any pictures of this. But I had four pounds of potatoes that I put in the Instant Pot with 2 cups of water. After pressurizing for 15 minutes and 4 minutes on manual, potatoes were soft and mashable. Delicious!!! Just mashed them right in the pot!

We had a ton of turkey left over from Thanksgiving, so I went ahead and cubed it all up along with the usual ingredients – celery, carrots, bell pepper, bay leaves, and chicken bullion cubes. I added six cups of water.  This turned out okay – I didn’t add enough spices (like poultry seasoning, salt, pepper) and I think I added WAY too much water. But it was still good! I didn’t cook the egg noodles in here though – I didn’t want it mixed in with the soup. But now that I think about it, I don’t think it would have been a bad idea! 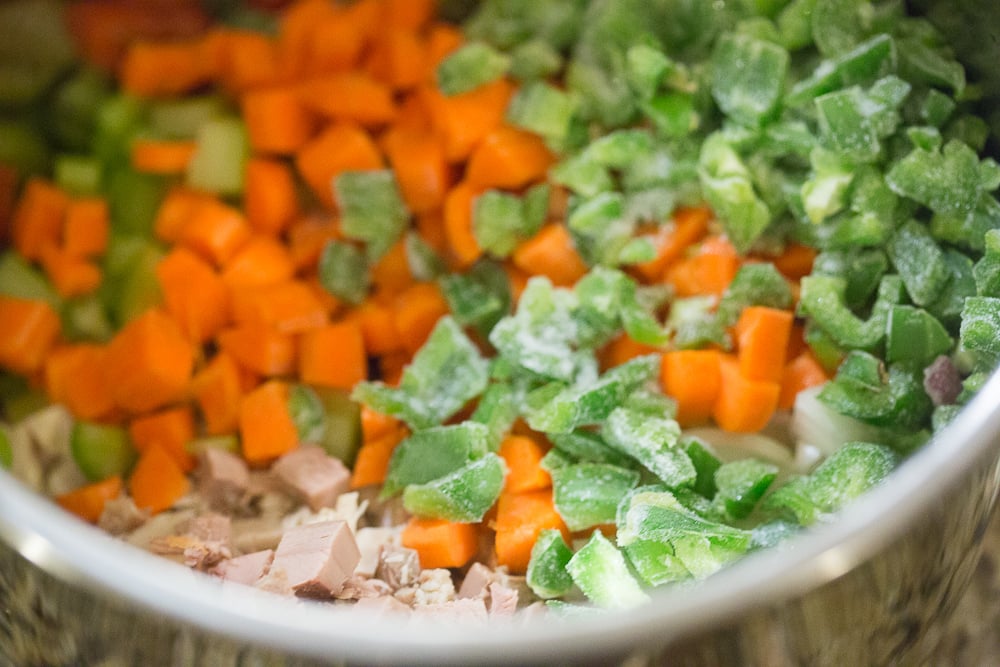 I’m making chilli tomorrow. I can’t tell you how this went. What I will say is that I used the “Saute” function to brown the meat. The meat is still in the aluminum pot in the fridge. Tomorrow morning, the plan is to put in all the other ingredients in it in the morning, use the delay feature for the first time, cook it at 30 minutes. My hope is that I will have dinner ready when we get home so that we can eat in 20 minutes and be off to dance practice!

Update: Chilli turned out tasty, but a little watery due to my error. Since I was using the delay feature for the first time, my thought process was that I should add more (not sure why). It came out a little runny, but it was still very flavorful and delicious.

So my original dilemma was not having a slow cooker that had a delay. My resolution was something much better than that – a pressure cooker with a delay, but would allow me to cook in half the time, saving me energy as well as LESS DISHES TO WASH! Its a one-pot miracle.

You can buy one here on Amazon. I would love if you could use this link, Instant Pot IP-DUO60. You WILL NOT pay a PENNY more nor has it been influenced by any brand if you click on the link, but what you will be doing is helping me as a small business make a tiny commission (I’m talking pennies) on your purchase so I can continue blogging and sharing 🙂 Any bit helps to pay for this server (and to convince Ryan to continue to do DIY projects for me)!

Read the reviews on Amazon. Join the Instant Pot Facebook Community. Check out YouTube for videos on how others are using, like Flo Lum’s videos on her cooking with the Instant Pot (click the hamburger menu on the top left in the video below to scroll through the list of videos she’s done using the Instant Pot).

The Instant Pot is the most amazing invention ever. I’m not sure why I haven’t heard about it until now. Here’s to a healthier pre-kick-start to the new year! (Raises glass.)

« For the Love of …. My Purse
Holiday Fashion for Girls »