Disclaimer: Don't read this if your pregnant. Ignorance is bliss.

I had my 18 week appointment this week. It was more than I envisioned it would be.

With Ansley, I had it pretty good. During my pregnancy with her - she was super easy. Meaning, every time I went in for my checkup, you could bet that I could hear that little heart beat of hers with my doctor's crappy doppler. Yep...it was always right around the 150 beats per minute mark (that's good).

With Baby #2, at my 18 week appointment, not so much. I basically left the appointment in tears. Here's how it went down:

Around 3:30 that day, I walk into the appointment thinking that I was two weeks closer from the big gender reveal appointment for hubby to find out. Little did I know that there was so much more.

As I'm sitting in the room, the doctor comes in and asks me again whether or not I wanted to have my baby tested for Down's Syndrome. For the third time, I said no because it doesn't change anything (even if I found out, the only thing I could do was be more prepared). She gave me the big spiel again and compared one of her patients who didn't find out versus the one who did with the test. I said no thank you, again.

Next, she lays me down, and uses her doppler to try and find baby. Usually, it just takes a few seconds to find Baby. A few minutes later - she finds a heart beat and said, "Well, that's your heartbeat, not Baby's" as she grabs my wrist to compare.

As she see's me starting to worry, she says to me, "This kid is being ornery." She finds MY heartbeat again with the doppler and says, "Stop freaking out - I can see your heart is racing."

At this point, I'm scared. My husband's not there for this visit (he usually comes to the first one, the big gender reveal, and of course the delivery).

Finally, after a good ten minutes of prodding at my belly, she says, "I'm going to have Diane take a peak with an ultrasound. Let's see if we have some magazines for you to read while we're waiting. Stop freaking out." She gives me one last glance, and leaves the room to coordinate with Diane, the sonographer.

Soon after she leaves, I launch to grab my phone and email my husband. I tell him, "The doctor said that Baby was ornery and that she couldn't find a heart beat and I'm waiting for the ultrasound."

He replies by asking if he should come down, I say no. Ten minutes later, I'm still sitting in the room. My heads spinning with all these horrible thoughts that keep on coming. I start crying with tears. I opened the gallery app on my phone and start looking at pictures of Ansley to make me feel better.

A few minutes later, my husband calls me, I picked up. I was kind of rude to him and made it short. Hearing his voice made me want to cry even more. I tell him to stop texting me and calling me until the ultrasounds done. I know in my heart of hearts that was wrong, and he, I'm sure, was freaking out too.

I think of one of my friends - who is always comforting. I email her to get some emotional support. She's been through this. I needed some words to help me through this long wait. Long long long wait. She answers, "Those dopplers are terrible and old too. They caused me so much unnecessary worry. You will be fine. Baby is fine. But I’m sending you lots of good vibes anyway because I know how scary that feeling is." Her words lifted a lot of weight off my shoulders.

Diane, the sonographer, finally peaks her head into my room and tells me to follow her into the ultrasound room. She starts looking at my paper chart and typing in my name, date of birth, etc...it felt like an eternity before she put that jelly and wand on my belly. All I wanted to see was that little flutter of a heart beat.

Then I saw what I wanted to see...I saw baby and his/her little heart beat. A rush of relief went over me.

But then, bad news:

Diane and I listened to the baby's heart beat. It was irregular...she said it would be at 150 one moment, then down to 70 another (not normal), then back to 150. She also said there was a little swelling, but "not much" on baby.

"What does that mean???" I ask her. She said it could mean any number of things - nothing is conclusive - then she ran and got the doctor. Great.

I hear my phone vibrating. I'm sure its my husband. Five minutes later, I hear it vibrating again as the doctor is in the room trying to analyze.

Doctor says its an arrhythmia. "What the heck is an arrhythmia?" I asked. She explained its a fancy way of saying an irregular heart beat.

"So does my baby have some sort of heart problem? Have you seen this before?" I ask her. She said she's seen it where its fast, but never when it slows down like this. My head starts spinning again.

She then packages me up, says that shes going to call the high risk ultrasound folks to schedule me for the next day. They put me in a room for me to wait. I wait for about twenty minutes. Mind you, I've been in this office for about 2.5 hours. I text Ryan I'm waiting for an appointment.

Now, whats going through my head is:

The doctor told me that nothing I could have done could have caused this. She also told me not to go on the internet. None of that comforted me.

I left before getting the appointment because it took forever.

I get a call the next morning only to find out I have another 48 hours to freak out about this. I guess the good thing is they have a peri-natalogist and a pediatric cardiologist (from Children's Mercy). They will be doing an echo cardiogram to check Baby's heart.

My husband and I talked about it last night...he sort of made me feel better. I did some research on the internet (even though doc told me not to). I ignored all the bad stuff, and looked at just the good outcomes.

For those that are going through a similar process with a baby with fetal arrhythmia, here's some comforting words I found on message boards:

All this to say, for those who were as lucky as me the first time around, you don't know how good you have it. That feeling that something could be wrong with your baby is a feeling I would not wish on my worst enemy.

On Wednesday, I went to the high risk pregnancy section of the hospital so that a pediatric cardiologist and peri-natalogist could see baby. Turns out - baby is healthy and well. No irregular heart beats - no swelling. Just bad equipment.

The doctor told me that the only theory he could come up with in regards to the heart beat that was heard on Monday was that maybe the sonographer and doctor were pushing on the baby too hard with the doppler. As far as the swelling, he said it could have been the monitor's resolution. Whew!

Thank you, God. Here's a picture of munchkin #2: 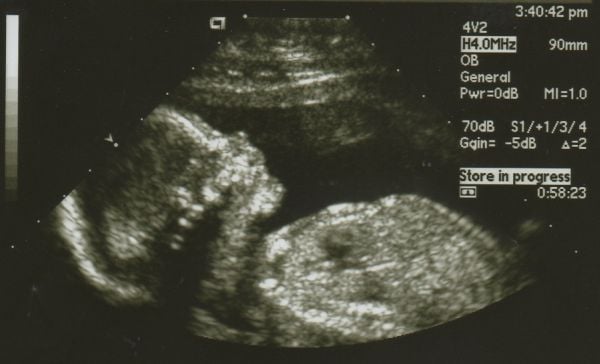