This Thanksgiving holiday, the world lost an amazing person - my grandmother. I'll miss her beautiful smile, her incredible stories, her amazingly delicious cooking, and most of all -  her love she shared with all of the family.

My mom called me at 3:00AM Thanksgiving morning. Ryan had picked up the phone in a semi-slumber - and I had this feeling after he said that it was my mom on the other line that Grandma had passed. She is the first person that I have lost that was close to me (knock on wood). I'd never been in that type of situation before, so I didn't know how I'd react.

When I got down there, the entire family was already there. As I entered her room, I looked at her for a couple minutes without saying a word. She looked at peace. I broke down.

Up until the beginning of this year, she was living by herself amazingly enough. She was suffering the last 6 months due to complications of her heart slowing down, due to natural causes. Grandma had been in and out of nursing homes and hospice, she would incrementally get better, and then get worse.

My cousin Lisa was there by her side the night Grandma passed. Lisa had told me that her gut was telling her to stay by Grandma's side that night - so she had stayed the night with Grandma on Thanksgiving Eve. She awoke to nurses standing beside Grandma's bed saying that she had passed in her sleep.

I know that my beautiful Grandma is in heaven right now, looking down on her amazing family.

Things I will remember about her:

Grandma was born in Laos, but was of Vietnamese descent. All I know of her was that she had a few sisters and brothers. When she was a teenager, her parents arranged to have her married to my grandfather, at the time a taxi cab driver.

With my grandfather, she had 6 children. She witness the passing of my grandfather a few months after her last child was born. She lived 54 years widowed with 6 children! During her life, she also sadly buried two of her children.

She was a refugee from Laos who fled the communist uprising. She fled with her family - half coming to the United States, and half going to France. Her children got married and had their own kids. Their kids have kids. She is survived in this world with 14 grandchildren and 7 great grandchildren who all love her dearly.

Every year starting with her 90th birthday, the entire fam bam got together to celebrate with a cake, Church's Chicken, and her favorite present of choice - Scratcher's Tickets.

Grandma on her 93rd/95th Birthday:

Grandma on her 94th/96th Final Birthday (thank you Brandi for making her cake): 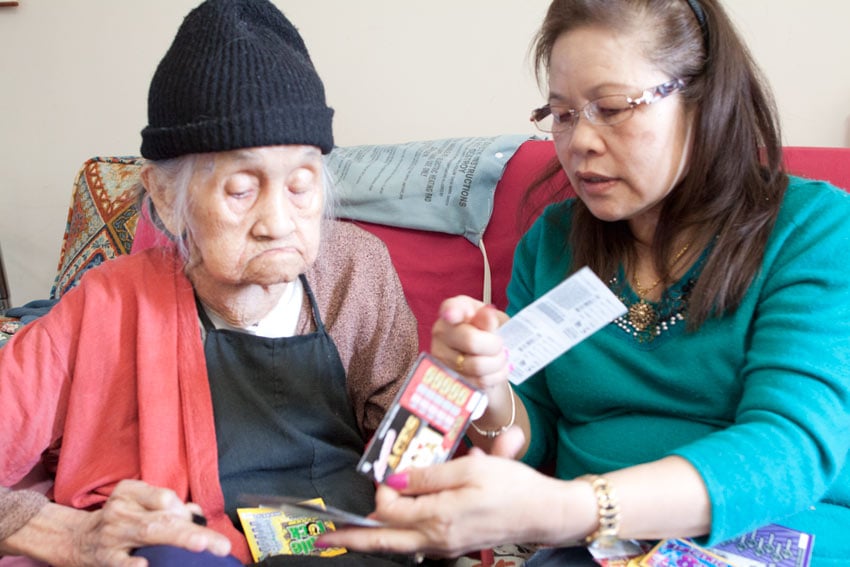 My cousin from France took these. Yeah, Grandma's gangsta.

Grandma with the girls: 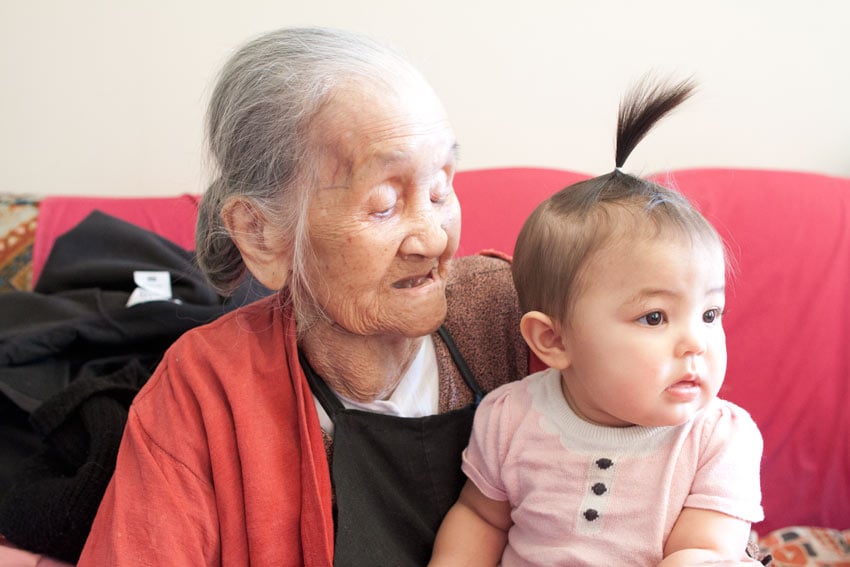 Grandma - you are forever in my heart. I am glad you got to meet the girls before your journey to heaven. You will be sorely missed. Please continue to look down on us with all of your love. With all of my love, Seng.

« Our Lawn: Before and After
Family Christmas Card Ideas with Two Adorable Daughters »