This is a post about what to do with kids artwork. When they are in preschool and elementary school, the paperwork they bring home is moutaneous. I’m going to share with you one of the easiest ways to preserve your kids artwork and save space in your home! This post was updated on September 28, 2019.

“Momma, look what I made!” says Ansley with her eyes glimmering at me. We get these pieces of artwork from her school and I have been trying to figure out how I should store them (and whether to keep them). On one hand, my parents have NO artwork from my childhood. On the other hand, the hubs’ parents have Ryan’s artwork stowed away…especially his Snoop Dog rendering that won an award at an art show!

I’m trying to strike a balance. Should I keep the snowman that was made out of a flourescent lightbulb? What about the awesome turkey with feathers on it made out of a toilet paper roll? These don’t lay flat like some of the other artwork.

Then, I saw a Pinterest idea which is from the blog called Harpers Happenings. But took it a step further: Take pictures of the kid WHILE they are at school, holding their artwork (with their smile)! By taking a picture of them in the classroom (and not at home), it gives further memories of how little they were and the classroom!

Every morning, I take the photos, then use an app called Pic Stitch to create a collage of the photos. Since I’m the one that does the dropoff and the hubs hardly sees the girls when they wake up in the morning, I send the collage off to Ryan every morning so that he gets a smile (and I get to stash it in my sent folder for browsing/easy access later).

I’ve been working on Aubrey’s ability to showcase her artwork. We’ve been doing this for a little over two weeks now. I’m pretty sure the teachers think that I’m annoying and bonkers (which I probably am).

I’m hoping this will (a) clear my clutter and (b) help me keep and cherish these memories!

I also have these other awesome ideas to display their Picasso’s, but it involves drilling holes in the wall. When I told Ryan, just like every husband would say, “Is that really necessary?” Proceeded by “I’ll get to it when I can.”

What do you do to display your kid’s artwork? 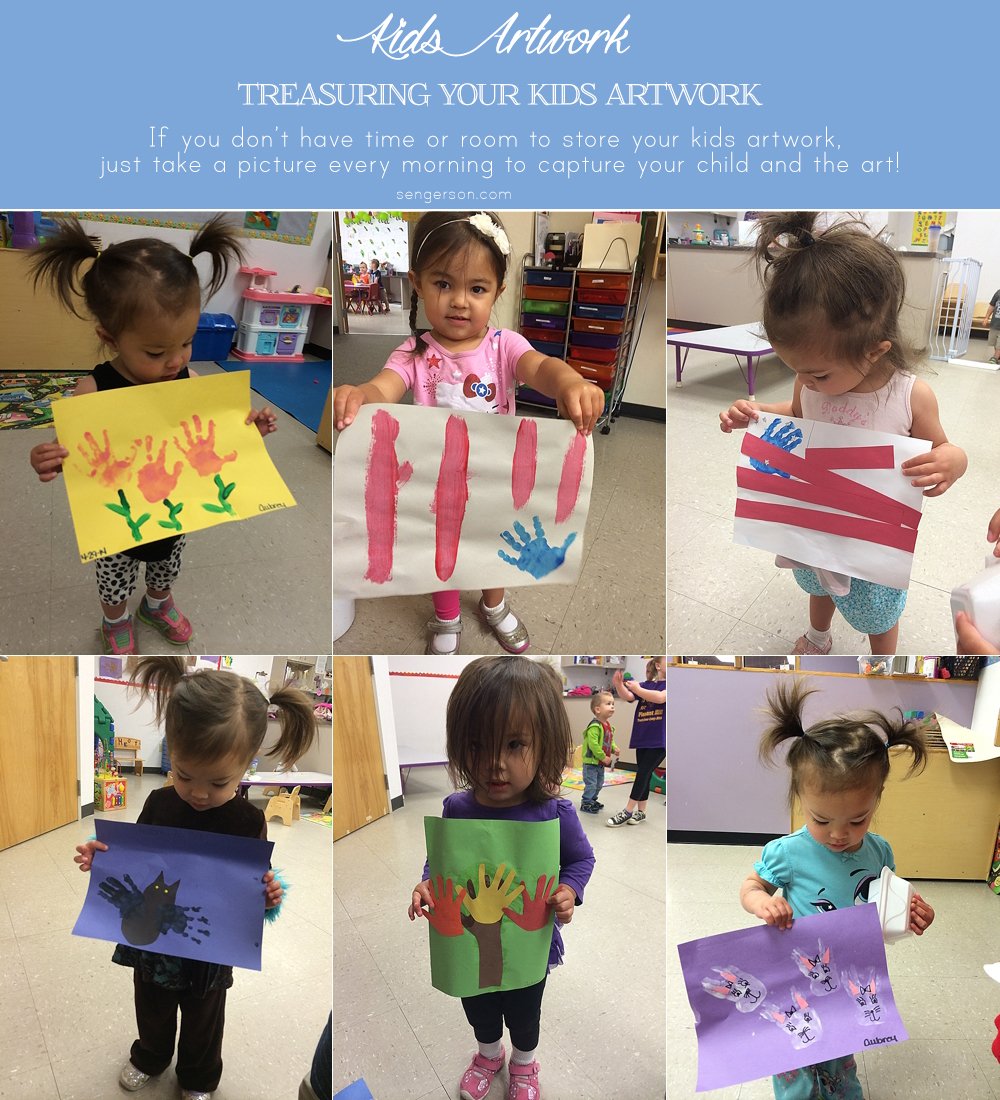 P.S. Love this post? Great! Check out the other part of this series here: the Modern Mom’s Guide to Time Saving Tools.