I’m sharing my review and ultimate tips and tricks on taking the family to Silver Dollar City in Branson, Missouri. 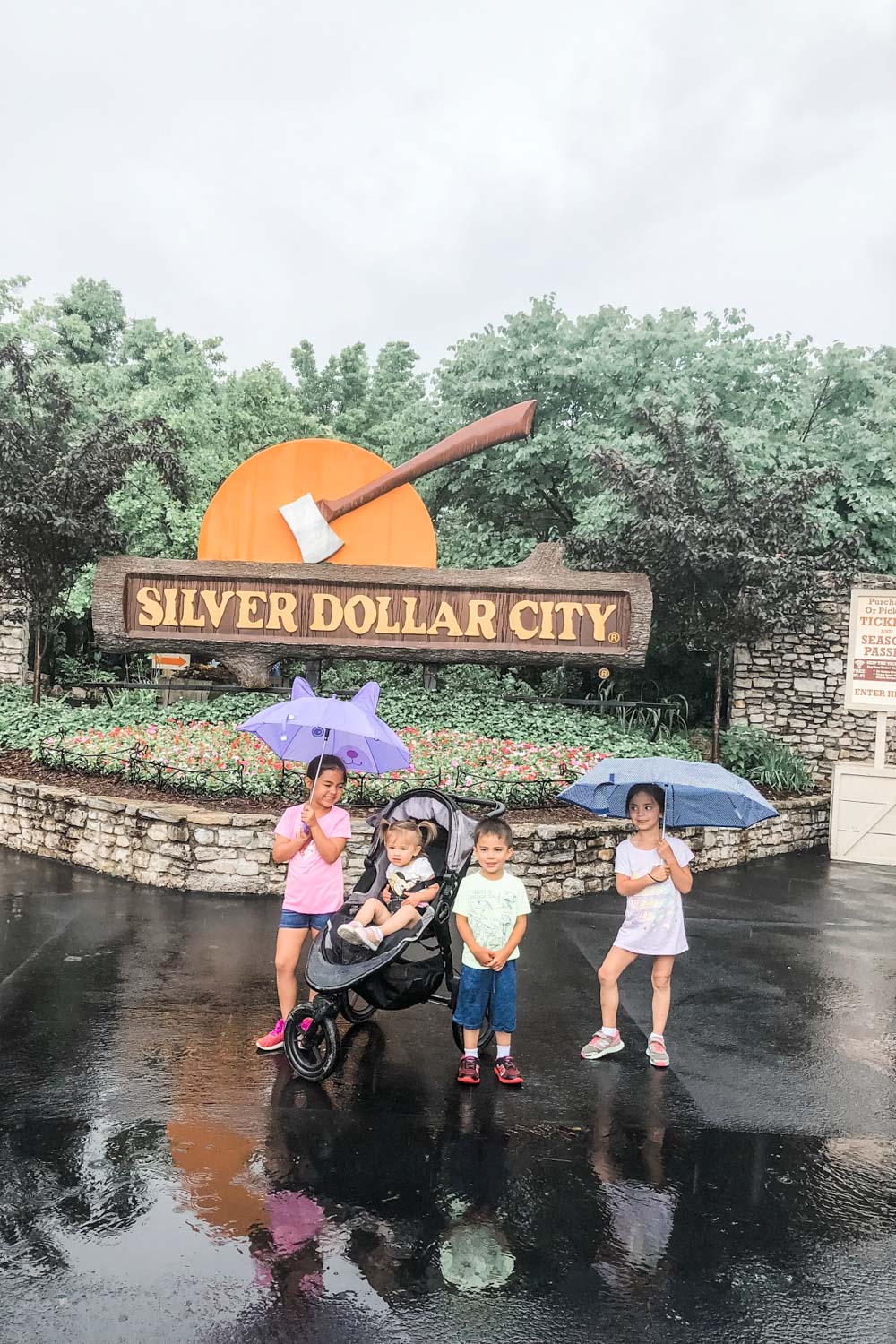 You guys, I finally did it. We took 4 kids on a trip to Branson and visited Silver Dollar City with all of them!

My kids were various heights on this trip, all of them were 48” and under. I want to take the time to share my tips and tricks and how each kid in each height range faired on the rides.

Yes, especially if you want a discount. See the next question.

If you haven’t purchased your tickets and for whatever reason need to visit the ticket booths, you’ll definitely want to get there early because the lines for the ticket office wrap around pretty quickly (at least it did when we were there).

How do I get discounts on tickets to Silver Dollar City?

There are a ton of ways to get tickets at a discount, ranging from $5 off to 30% off. As of this writing, the best discount is being able to go to Silver Dollar City on Thursday at $35 a pop. There are ALWAYS offers, so make sure you check their offers page. If you work in Missouri anywhere, there maybe a perks site for employees where Silver Dollar City often provides discounts.

Should I get a season pass for Silver Dollar City?

If you plan on going two or more days, yes! It will save you money!

What age are kids free for Silver Dollar City?

Kids under three are free, but don’t think that it’s because there aren’t a lot of things for them to do. There are actually A LOT of rides that they can do. Fireman’s Landing and the Grand Exposition are spots that have a lto of rides for them.

However, it’s not just rides! There are great shows and demonstrations that they’ll love. There is also a little petting farm area near the front that kids often enjoy as well.

What time should I go to Silver Dollar City?

Park opening is different, so I would check their main site. However, I would arrive 20 minutes prior to park opening to make the most of your day.

There’s always a crowd out front. It’s nothing like Disney, but it is fairly busy.

How much is parking?

Premier Parking is $50, and it’s right out front.

There is also free parking WAY in the back (it’s like a 10 minute walk). We do the walk with four of our kids, even after a long day. Sure, they complain, but they didn’t die from it!

Should I bring a stroller to Silver Dollar City?

If you have little kids under four, yes! The park has lots of big hills, so make sure you have a stroller with good brakes. I’m SERIOUS. There are 20 degree graded inclines on so make sure you are aware of that!

If you plan on going for two days or more, it’s worth it to purchase the season passes because it’s less per day. In addition to that, you get a discount on a lot of food and merchandise inside the park.

What time should I get to Silver Dollar City in the morning?

I would recommend being at the gates no later than 20 minutes before park opening. If you want to take a photo in front of the sign BEFORE your face melts off, I would recommend 20-30 minutes because there will be less people there. The time that I went, I know there was a HUGE crowd in the morning try to get to the rides.

Should I go to Silver Dollar City on a rainy day?

If the forecast is going to be on and off rain, I would say yes! Silver Dollar City has a sunny day guarantee that isn’t advertised very broadly. If it rains for more than 90 minutes consecutively where it impacts the rides, they will give you a comp ticket for another full day of the park any day of that same year. On our trip this year, we were able to go to guest relations after having had a full day that ended with a small rain storm that stopped some of the rides. We went to guest relations and got no friction. We were able to come back the following day with those tickets!

Note: The next day the forecast was super sunny, and we had to stand in line to trade our “comp tickets” fo real ones to get into the park. That was the downside – we had to visit the ticket booth the day after, which typically meant the lines were a lot longer because people who were deterred the day before with the rain were going to be visiting the following day. And it was PACKED on the second day (probably because the people who had planned on coming the previous day were coming.) 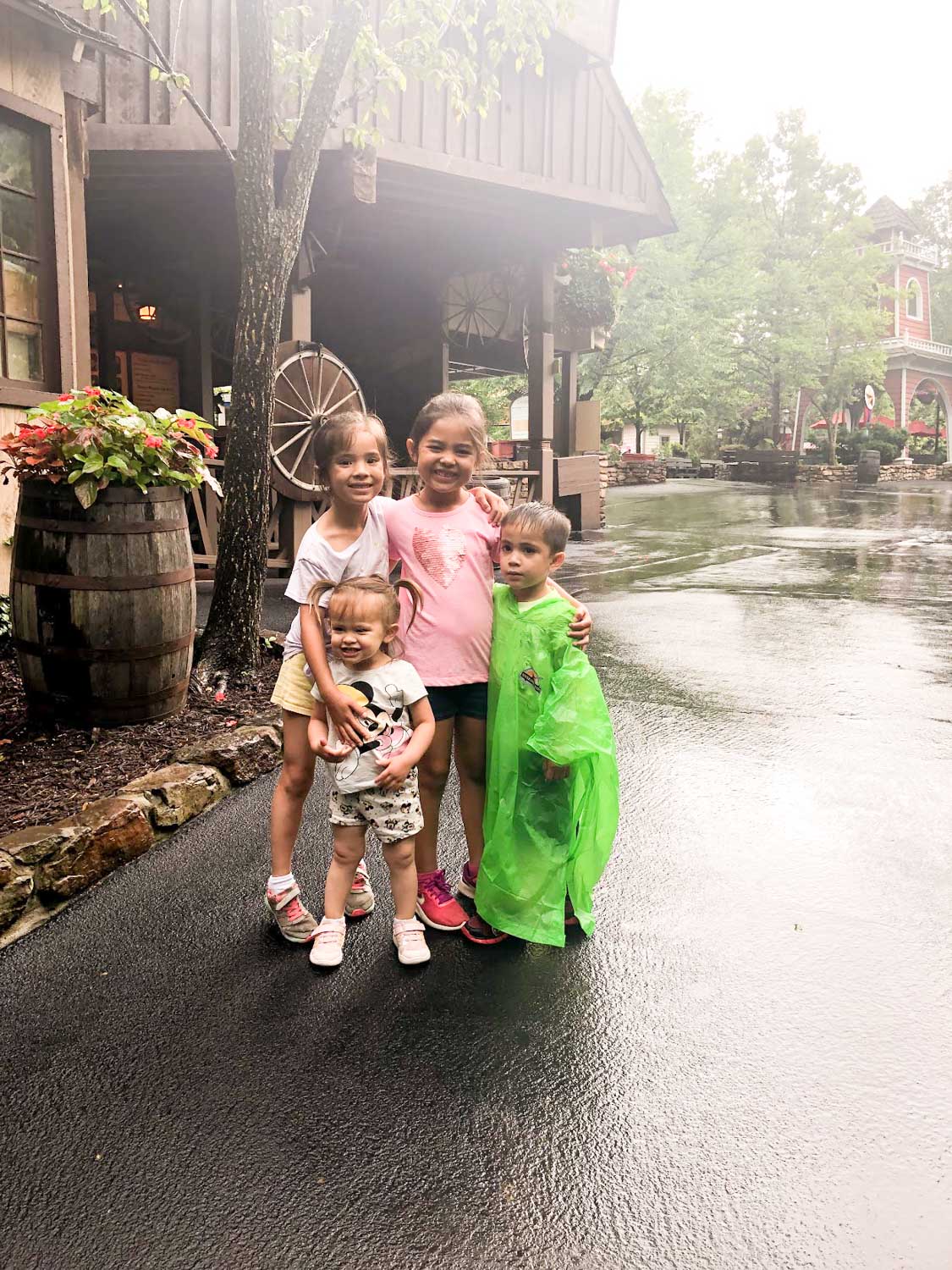 What are some of the best family rides at Silver Dollar City?

With our big family of six and kids ranging in age from 2 years old to 8 years old, our favorite two rides that we could ride together as a family was Tom and Huck’s River Blast.

EVERYONE got to go on! We got completely soaked on this ride. You are cranking a wheel and shooting spectators with water and they are shooting you back. Initially, I thought it was low key and didn’t think anything of it walking in. Once you get off the boat soaked, you get the motivation to start spraying the boats as a spectator. All the kids including my toddler had fun! I couldn’t take any photos because my phone would have gotten completely soaked in that area.

It was literally the most fun ride besides American Plunge that was there! 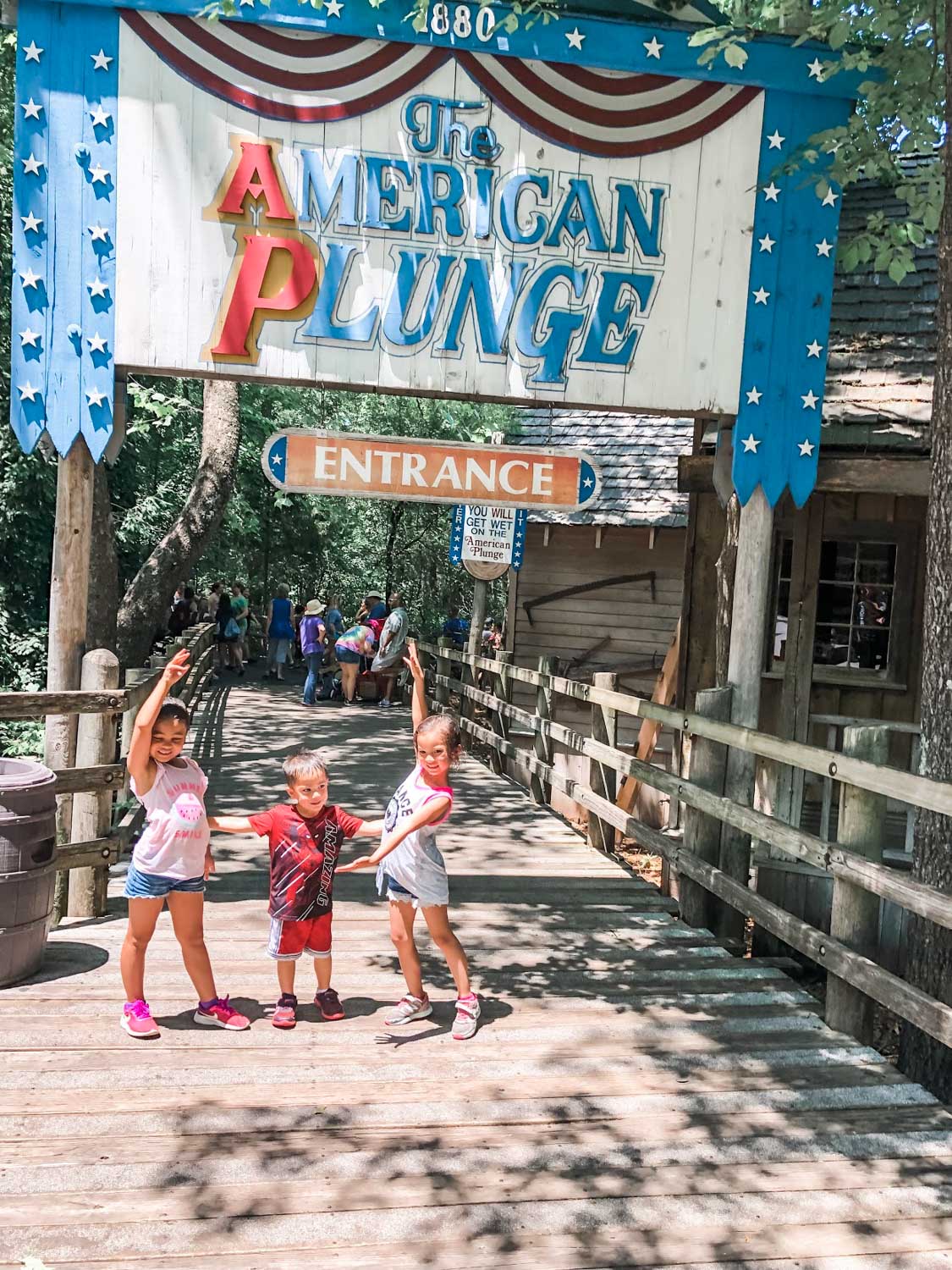 How do you compare Silver Dollar City versus Worlds of Fun?

Should I bring kids swimsuits to Silver Dollar City?

There is a cute splash area in Fireman’s Landing that would be super fun for kids, so I would say yes! 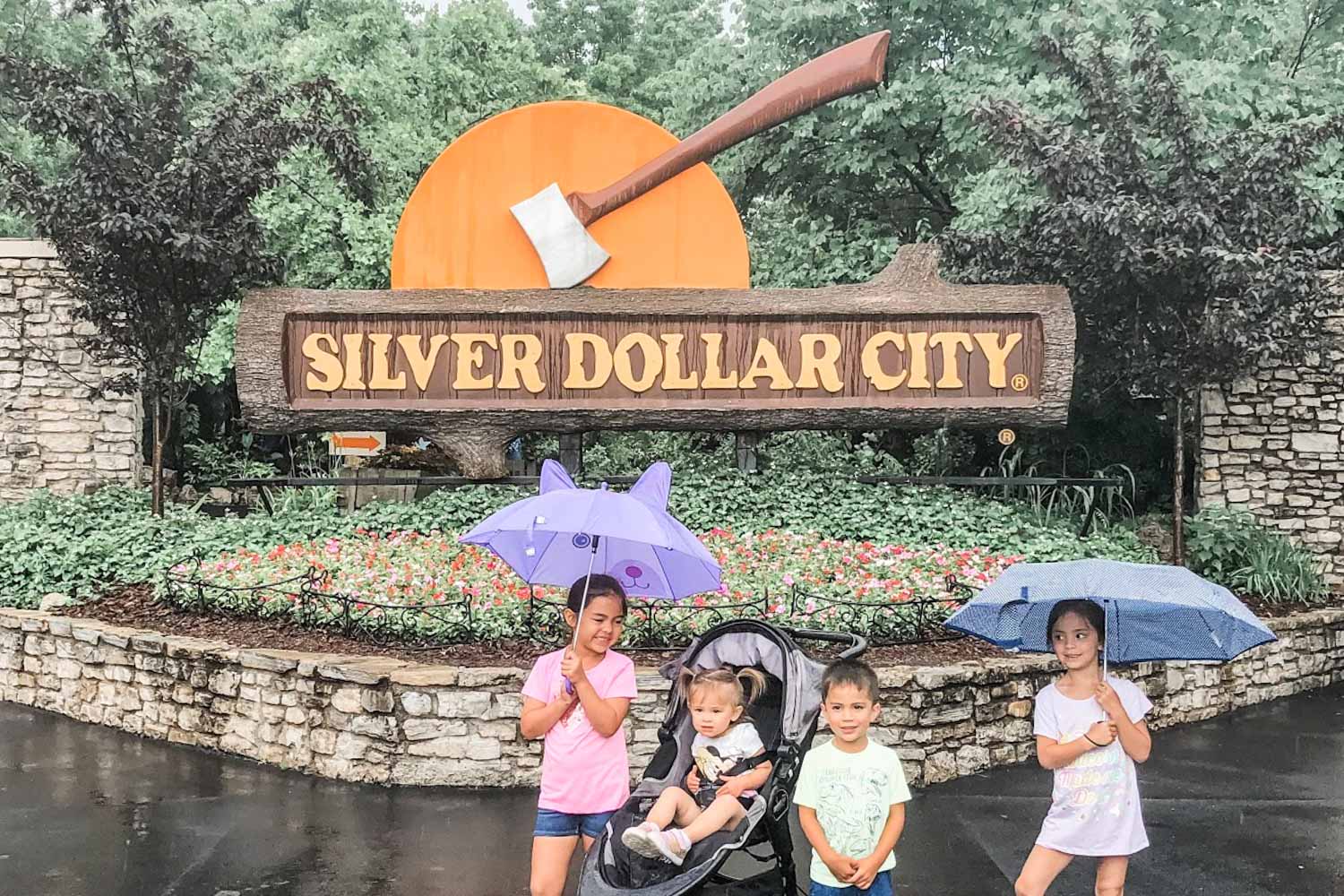 What are Silver Dollar City Rides for Two Year Olds?

These rides require you to ride with children under 36″:

While it’s only a handful of rides, just remember there are so many things to see and do, which includes watching some of the demo’s for cooking and blacksmithing!

Here’s a list of all the attractions and heights!

Can my kids ride Fire in the Hole at Silver Dollar City?

As long as your kids are 36″, they can ride Fire in the Hole! My little boy absolutely loved it! 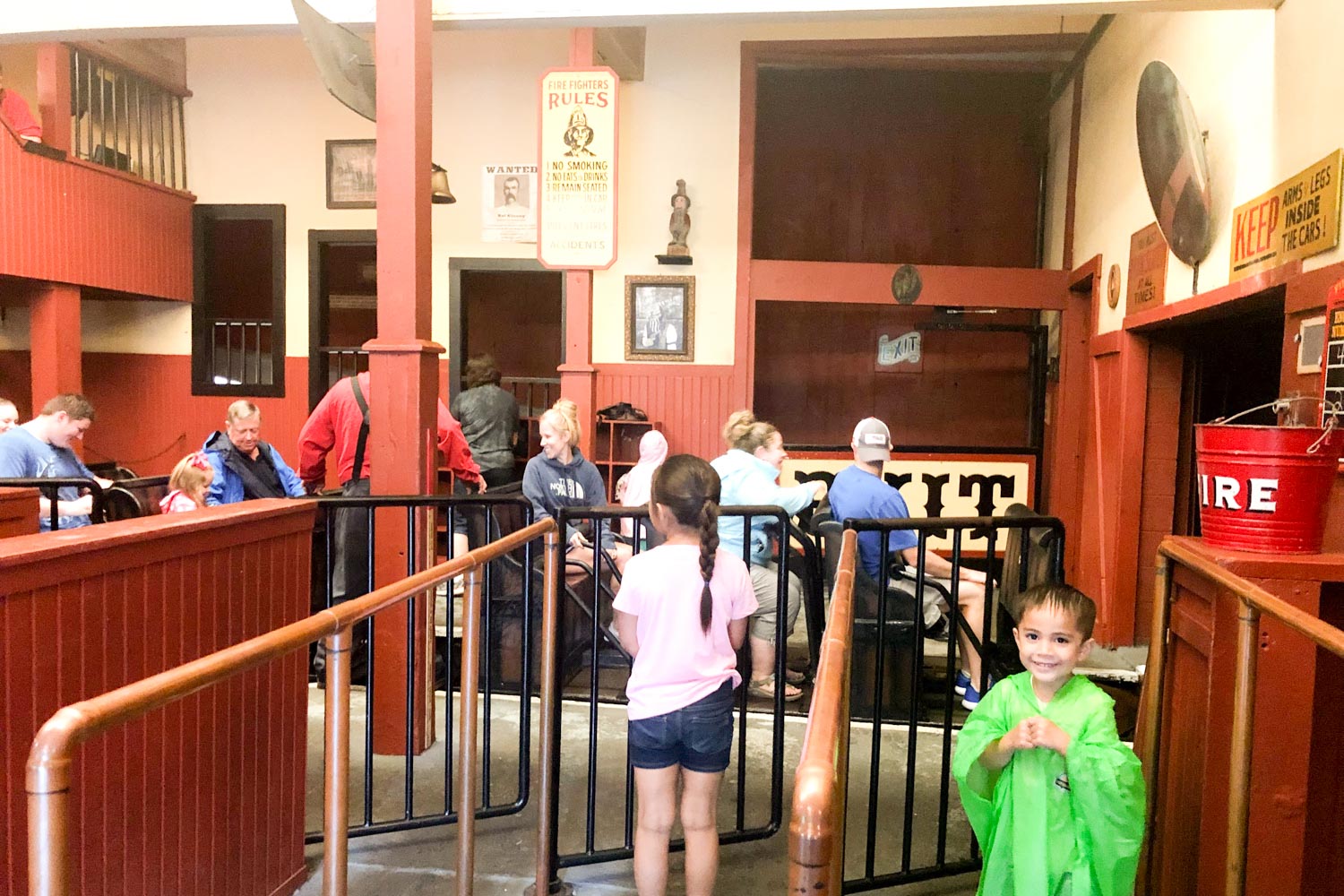 Can you take food and drink into Silver Dollar City?

Silver Dollar City allows small coolers inside their parks, which means you can bring lunch and beverages for your family if they fit!

Where can I find a map to Silver Dollar City?

Here’s the link to the map to Silver Dollar City.

Is Silver Dollar City worth it with toddlers?

If you are going on a spring or spring-like day, yes. If you are taking their older siblings, yes. If you are just taking the toddler with you and the spouse, I would say no, especially if they are under the age of two. It’s not worth it in my humble opinion. 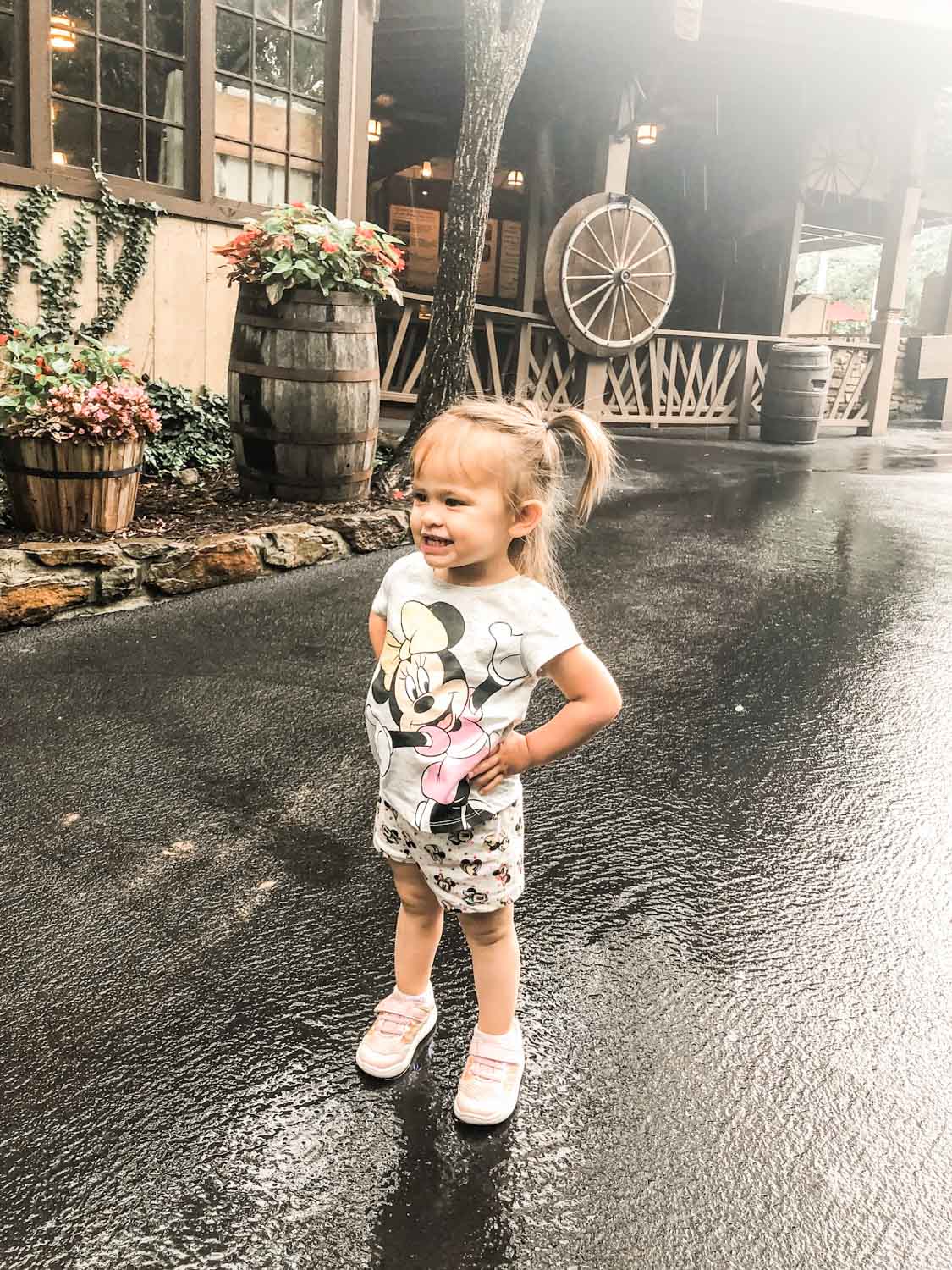 Absolutely. While I did not care for the blacksmithing demo’s, my husband absolutely loved it! So, it has everything for everyone!

Yes! They have Fast Pases which is actually a Disney term. The term that is used at Silver Dollar City is Trailblazer, and it’s a ticket “add-on”. You actually BUY the Fast Pass, unlike Disney’s Fast Pass system. Check this site out for more details. We didn’t buy it, but if you are going on a super busy day, I would definitely recommend it.

What’s a sample itinerary for one day at Silver Dollar City?

Here’s my recommendation on how to tour Silver Dollar City in one day.

What are Silver Dollar City Busy Days and Times?

Any Friday, Saturday or Sunday will be PACKED for Silver Dollar City between late May all the way up to end of July. I would recommend going on Monday through Thursday. Especially Thursday because you can get deals at local grocery stores for tickets for under $35!

With our four kids, they had an absolute blast! I would totally say that one day is definitely enough in the parks. Huck & Finn’s River Blast and American Plunge were the two most memorable rides by far there. Overall, thumbs up. Silver Dollar City is definitely worth visiting!

While you are in Branson, check out the Top of the Rock Golf Cart Tour – it’s incredible! 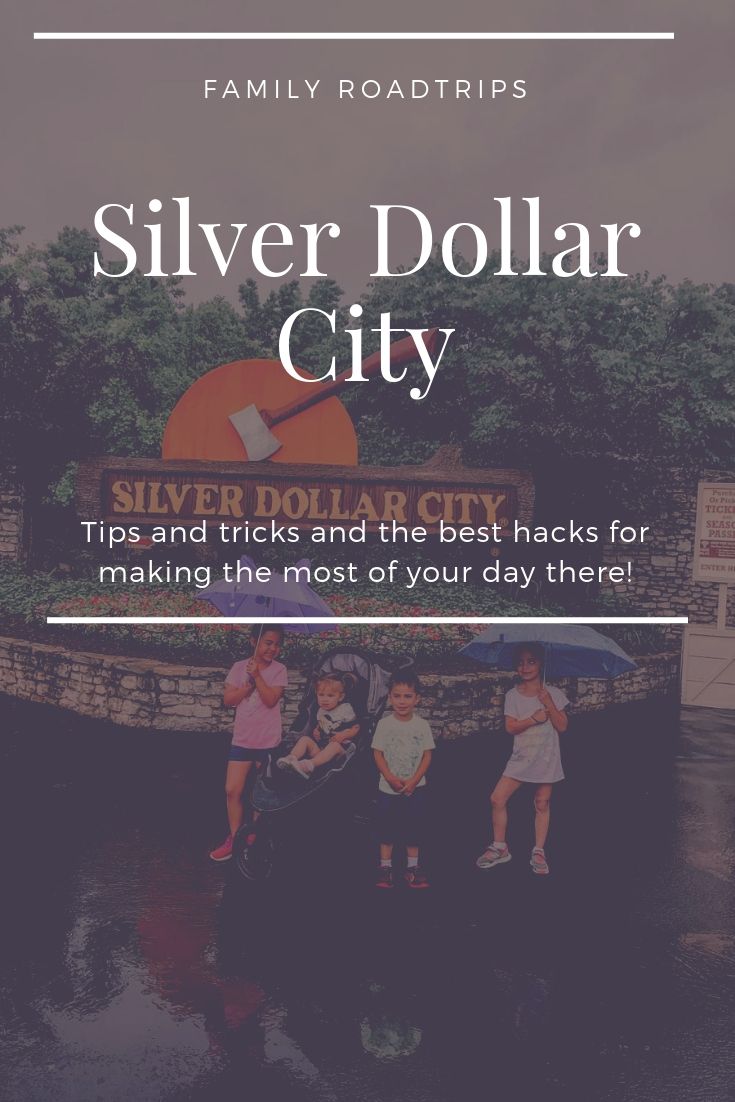 If you loved this post about the Top of the Rock Golf Cart Tour in Branson, you might love these other posts about Missouri vacation posts: