This Christmas was a special one for my family. It was Ansley's first Christmas AND we had a special surprise for our folks.

For Ansley's first Christmas - let's just  say she made out with half of Santa's sleigh. She has been a pretty good girl since May. No coal for her this year. 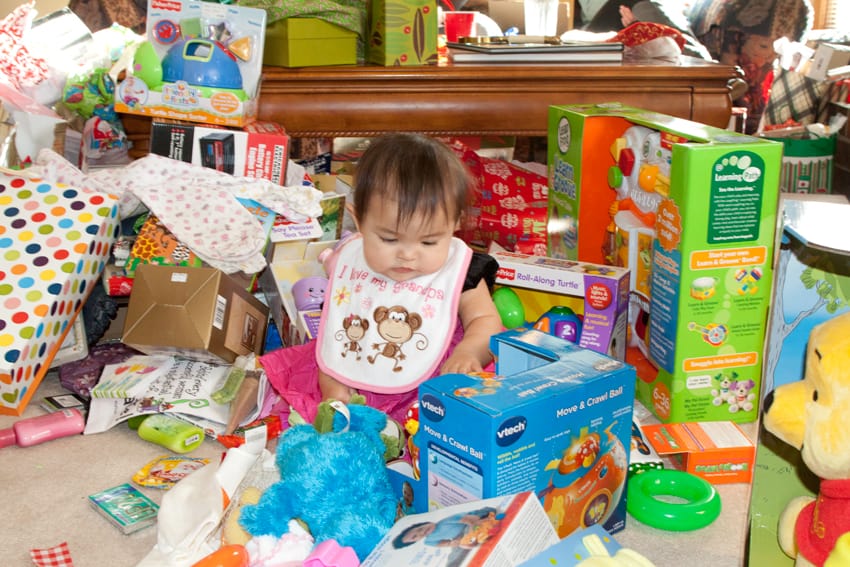 We went over to each grandparent's house and had them help Ansley open her first ever Christmas present.

In the first present was a shirt that said in the front "Guess what Grandma? (Turn me around)". The back of it said, "I'm going to be a big sister!" Both sets of parents somehow expected it, but were still surprised. I think this was our best present yet!! The second gift was a 10 week ultrasound of the second baby.

We're due in the middle of July. With our second. SECOND. Can you believe it??!!?? We're going to be busy parents.

For those that are curious, it wasn't a surprise - I mean it sort of was. We weren't doing anything to "prevent" it from happening if you know what I mean. I always told Ryan I wanted to have babies before I was thirty - so that we can kick them out of the house by fifty.

Ansley and the next baby will be 13.5 months apart - which means they will be very close. At least, that's what everyone tells me. So they are 1.5 months from being "Irish Twins" (click the link if you never heard the term before, I didn't the first time).

We haven't sent our annual Christmas letter for that reason - we wanted to include that in our news. So, I think our Christmas cards will be sent a little later this year though.

Anyone have advice for having two little kiddos around the same age?? We're super excited...and trying to prepare. You know how that goes...

Oh...and we're not finding out the gender this time around either. I love surprises.