Home » Motherhood » Buying Tickets for Our First Concert with Kids

I'm so excited next week. We just got tickets for the Sprint Center for Disney on Ice.

First, I'm excited because I can't wait to let the girls see Mickey and Minnie mouse up close and personal. Last week during the St. Patrick's parade, my oldest saw the Easter bunny and a leprechaun as we were walking through the parade. She ran up to them, tugged on their leg and said, "Hey you. Down here." So funny. Most of my friends' kids are scared of these characters, NOT my kids! With these Disney on Ice tickets, we're in the VIP seating area in the second row - so I'm excited to see what the view is going to be like. I'll write another review about the Disney on Ice seating and how it panned out for us post-show.

Secondly, I'm excited that this is my first concert EVER with Ryan. I know, kind of pathetic, but kind of awesome at the same time. Moreover, we're all as a family experiencing our personal FIRSTS together at the Sprint Center together at the SAME TIME.

I mean, what 2 and 3 year old toddler wouldn't want to see Minnie Mouse skating around?! I showed Ansley a video of it last night and said, "If you're good, this is what you'll get to see next week?" She watched it for a second, turned to me with her twinkling eyes, and asked, "Princesses, Minnie and Mickey?" I nodded my head. The biggest smile came over her face.

As I was researching what to expect with a toddler at their first concert, some of the recommendations were to buy a costume that they could wear since most kids would be wearing one. In addition to that, buy something they can hold because there would be over priced products everywhere!

So, I bought Aubrey a Minnie Mouse outfit and Ansley a Snow White outfit. Yes, I know. I go over the top sometimes. 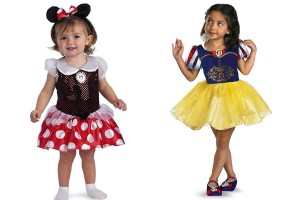 As Ryan would say (while shaking his head), "You did what?"

Who else is going to the Kansas City Disney on Ice show?!!!

« Do kids like Daylight Savings Time?
Another Milestone at 2 Years Old »